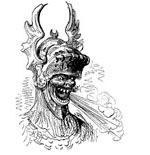 By Richard E. Gallagher | November 2022
Richard E. Gallagher, M.D., a board-certified psychiatrist, is Professor of Psychiatry at New York Medical College. He studied classics at Princeton and trained in psychiatry at Yale. He is a faculty member at the Columbia University Center for Psychoanalytic Training and Research and at St. Joseph’s Seminary and College (Archdiocese of New York). The longest-standing American member of the International Association of Exorcists, he is the author of Demonic Foes: My Twenty-Five Years as a Psychiatrist Investigating Possessions, Diabolic Attacks, and the Paranormal (HarperOne, 2020).

Ed. Note: The first of this two-part series appeared in our October issue.

There have, of course, been many genuine supernatural miracles and revelations in Christian history. On the other hand, in our discussion of the sometimes impactful paranormal (or, more properly, preternatural) experiences many spiritually confused or diabolically assailed individuals have undergone throughout history, we have highlighted the prominent but controversial case of the alleged mystic and seer Adrienne von Speyr (1902-1967), a convert to Catholicism. We have seen how her personal history and collaboration with the theologian Hans Urs von Balthasar (secretive during her lifetime) involved a number of highly questionable phenomena. These included, prominently, a preoccupation, on both their parts, with particular theological interests (e.g., Hell and the demonic, highly speculative Trinitarian notions, and certain esoterica); “working” practices strikingly similar to those of conventional spiritualism (e.g., channeling and summoning of spirits); and occurrences with close parallels to ones long recognized as characteristically, even classically, preternatural or “pseudo-mystical” in nature (e.g., bilocation and levitation).

As noted, true spiritual experts have never concluded that such alleged “gifts” are necessarily supernatural, as Speyr and Balthasar, it appears, uncritically assumed of hers. It has long been recognized, however, that these supposed “charisms,” albeit thought popularly as exclusive of the saintly, are frequently diabolic tricks.

Further, and even more disturbingly, Balthasar himself noted a “strange, deep voice” that emerged from Speyr on several occasions. This “voice,” speaking through her, was suspiciously vituperative and otherwise odd and revealing in certain motivated pronouncements, for instance, during her “Catholic baptism” when she appeared reluctant to affirm the Tridentine extra ecclesia, nulla salus (“Outside the Church there is no salvation”) formula. In his book Our Task (1980) Balthasar explicitly describes the voice as speaking with “an ice-cold severity” and “not her own voice. Someone else is speaking out of her…. A terrifying indictment continues for almost an hour.”

That observation, alongside Speyr’s forgetting her “voice” and “revelations” immediately after coming out of her “trance” states, suggests not a dissociative disorder, another common alternative theory, but the diabolic hypothesis, including some level of direct control by an evil spirit, if only intermittently. Though Speyr was not possessed, this sort of voicing is characteristic of what’s heard in many serious diabolic states, including routinely in genuine possessions.

If our Lord could use "narrow gate" imagery to spur His listeners to repentance, then so can we.