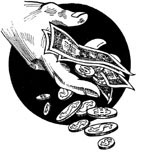 Sports fans are familiar with the selling of “naming rights” to private corporations that wish to raise their profiles by slapping their names on stadiums and arenas. The New England Patriots football team, for example, plays at Gillette Stadium, named after the shaving-products company, a division of Proctor & Gamble. The deals are typically in the tens of millions of dollars — a substantial windfall for municipal and private stadium owners — but they are not without the occasional snafu. In the late 1990s, when the San Francisco Giants baseball team announced its plans to build a new downtown ballpark, the local phone company, PacBell, bought up the naming rights before the ground was even broken. But after the stadium had been open for two seasons, PacBell was bought out by SBC Communications, and the Giants’ home field went from being known as PacBell Park to SBC Park. When SBC was bought out by AT&T a few years later, the stadium became known as AT&T Park. To avoid confusion, locals have taken to calling the stadium “The Phone Booth.”

Naming-rights deals aren’t limited to sports stadiums. Colleges and universities have a longstanding tradition of naming buildings after major benefactors. This has led to some incongruous associations. The University of California at Los Angeles, for example, is home to the David Geffen School of Medicine. The medical school was renamed when the openly gay, multibillionaire music producer gave the university a $200 million endowment. Mr. Geffen happens to be a college dropout.

But even stranger namings are afoot. Not content to wait around for major donations, some schools have begun selling naming rights to some of their, shall we say, less prestigious facilities. Harvard Law School, for example, renamed a men’s restroom after William Falik, who, according to a “Business Briefing” in Time magazine (Mar. 12), “donated $100,000 to claim the lavatory.” At the University of Pennsylvania, plaques line a bathroom wall reading, “This relief you are now experiencing is made possible by a gift from Michael Zinman.” Dixie State College in Utah has gone so far as to sell naming rights to individual bathroom stalls.

It makes one pause to wonder whether everything isn’t up for sale these days.

The Social Purpose of Private Property

There is no principle in even the best marketing theory to distinguish useful goods that might benefit the public from evil or useless items.