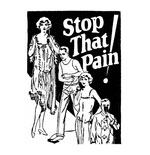 Helmholtz Watson is an alpha-plus male in Aldous Huxley’s dystopic novel Brave New World (1932). Broad-shouldered, deep-chested, tall, attractive to the ladies, and respected by other well-endowed males in his elite caste, Helmholtz is a lecturer at the College of Emotional Engineering (CEE). His job: sloganeering. He’s a sort of reductive, futuristic Madison Avenue man. But rather than pushing products for slick corporations, he’s a prime player in the World State’s ubiquitous social-conditioning program known as hypnopaedia, or “sleep teaching.”

Helmholtz’s only creative task at the CEE is to compose pithy slogans that can be readily absorbed and regurgitated by the masses. Once devised, these slogans are piped into the ears of sleeping children who invariably come to accept them as undeniable truths and repeat them to one another in place of authentic conversation. Ironically, given the superficiality of Huxley’s society, these hypnopaedic proverbs are heavily laden with World State propaganda, and their use is intended primarily to diffuse anything but the most anodyne conversations.

For the reader, these proverbs provide an efficient means by which to apprehend the precepts that undergird Huxley’s imagined (but eerily familiar) futuristic dystopia, the citizens of which are manipulated not by force and tyranny but by constant amusement and pleasure. Slogans like “When the individual feels, the community reels” and “Everyone belongs to everyone else” indicate the Marxist penchant to jettison individual human dignity in favor of an ersatz common good, including pervasive sexual promiscuity, from age five and up. “Ending is better than mending” and “The more stitches, the less riches” ungrammatically reflect the World State’s self-indulgent consumerist mentality. “Never put off tomorrow the fun you can have today” captures its culture of hedonism and instant gratification. “History is bunk” sums up its Modernist attitude toward the past, one that views historical facts as unpleasant and seeks to minimize the influence of wisdom, tradition, and culture. Most importantly, perhaps, the universal use of the happy pill soma is encapsulated in gems like “A gramme is better than a damn” and “One cubic centimeter cures ten gloomy sentiments.” Why deal with unpleasant emotions like anger, fear, or sadness when you can pop a pill to take you away from your quotidian cares?

Although Helmholtz possesses everything the World State has to offer a man in this brave new world, he senses he’s missing something important, something essential to his very being. In the early chapters of Huxley’s prescient novel, Helmholtz flirts with the seemingly farfetched concept that he is an individual capable of independent thought, as unorthodox an idea as any in the World State. When he shares his suspicions with the novel’s unlikable gadfly anti-hero Bernard Marx, the plot unfolds with the typical dystopian trope of unorthodox man versus society. Helmholtz and Bernard decide to rebel against the World State, each in his own way, but both inspired by the nagging belief that there’s more to this life than simply amusing themselves to death.

The Heart of the Matter

I first read Graham Greene’s The Heart of the Matter in 1948, when it came…