Volume > Issue > On Pilgrimage with Shakespeare in Protestant England 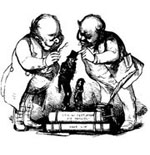 AMASSING CREDIT IN THE TREASURE HOUSE OF MERIT

By Kenneth Colston | May 2017
Kenneth Colston, a retired teacher of languages, resides in St. Louis. His articles on literature have appeared recently in Logos: A Journal of Catholic Thought and Culture, Saint Austin Review, The New Criterion, Homiletic and Pastoral Review, Crisis, and First Things.

Cultural practices die hard, thanks, in no small part, to the great poets. Geoffrey Chaucer in The Canterbury Tales immortalized the salvific impulse of medieval man to take a painful joy ride: “So priketh hem Nature in hir corages / Than longen folk to goon on pilgrimages.” The impulse that stirred those hearts was the belief, tragically rejected by the fifteenth-century Protestant Reformers, that our acts of love create yet more love, that they and all our efforts may be offered as free salvific gifts to all of mankind, and that they may accrue to the benefit of others even in the next life. Such a belief binds us all together productively in work and leisure; without it, we are damned misers in our solitary self-love.

Medieval men traveled their short lives on pilgrimage, literal at times, metaphorical constantly. According to historian Eamon Duffy, as many as a hundred thousand pilgrims a year flocked to Canterbury alone before the English Reformation. Pilgrims’ badges found at Henry VI’s shrine at Windsor totaled nearly a third as many in fifty years as those found at Canterbury for Becket in three hundred years. Granted the abuses of lewdness, superstition, neglect of domestic duties, and “grace for sale,” the highest purposes of pilgrimages were to do penance for sin, to reawaken life in Christ or holiness, to ask for a special favor, and to gain an indulgence to remit the temporal effects of sin by drawing on and even adding to the “treasury of merit” of Christ and the saints. The pilgrim in John Heywood’s Four P’s (1543), the Catholic master of the interlude who fled to Belgium at the accession of Elizabeth, makes the traditional, commonsense claim: The “dayly payne” of the pilgrim will move God to mercy and thus “shall therby meryte more hyely / Then by any thynge done by man.” God’s merit is, of course, higher than man’s free penitential act, but the latter has consequence.

As we mark the five-hundredth anniversary of the tragedy now often celebrated as the triumph of individual conscience over the corrupt Whore of Babylon, it is essential to remember the enormous loss: The Reformation began, to put it theologically, as a denial of cooperative grace. Appalled that indulgences were traded like trinkets at a market, Martin Luther, John Calvin, and their followers ossified their Augustinian theology and bound free will, junked the sacraments, ridiculed sacramentals, dethroned sacred Tradition, looted the treasure house of merit, emptied Purgatory, overbooked Hell, stripped the altars, whitewashed the icons, gagged the saints, grounded pilgrimages, muzzled prayer, and decapitated the Church. All this was aimed at suppressing the truth that man could add of his own pious efforts, or merit by good works done in true charity, an increase in sanctifying grace. The Reformation was a reign of spiritual terror.

Many of today’s Catholics do not understand cooperative grace, and so the Reformation has done serious damage even within the Catholic Church, particularly in the past fifty years, resulting in a de-emphasis not only in pilgrimages, Purgatory, indulgences, vicarious atonement, and the communion of saints, but also in the salutary effects of praying the Rosary, performing works of mercy, cultivating the cardinal virtues, practicing devotions, and offering up our own sacrifices at Mass. The loss of an understanding of cooperative grace has starved the Body of Christ, weakened the will, cast aside intellectual freedom, devalued human acts, sapped motivation, robbed daily work of meaning, and stupefied the soul.