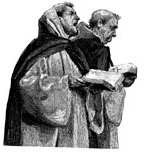 Michael Berg is a professor of mathematics at Loyola Marymount University in Los Angeles, where he also teaches in the honors program on the perennial philosophy and the philosophy of science.

St. Thomas Aquinas has long been the philosopher and theologian par excellence for the Church. The Church has never diminished her laudatory judgment of the Dominican to whom she gave the title “Angelic Doctor.” And, although Pope Leo XIII can perhaps be counted as his greatest champion among pontiffs, this judgment survives even in these anything-but-halcyon modern times, with the philosopher Karol Wojtyla wearing the shoes of the fisherman. In Veritatis Splendor and Fides et Ratio Pope John Paul II goes out of his way to develop the imperative that proper scholarship and research in the philosophical sphere (and many allied others) must always measure itself against the standard of Thomism.

At the same time, it is certainly true that during his tenure as a professor of philosophy in Poland, our present Pontiff established himself as a specialist in personalism, which still greatly influences his writings. The relationship between the Pope’s personalism and St. Thomas’s teachings is one of complementarity, for ultimately neither personalism nor any other philosophical system is proper to the Church of Rome if it is irreconcilably at odds with what St. Thomas taught.

The same (and then some) holds true for theology, even in the face of creeping modernism. Already in the 13th century St. Thomas counted among his colleagues at the University of Paris none other than the Seraphic Doctor himself, St. Bonaventure, whose theological and philosophical sensibilities certainly differed greatly from those of St. Thomas. But juxtaposing their systems generally reveals complementarity, not conflict.

It is perhaps not too much of an oversimplification to say that this particular flavor of complementarity has its genesis in the interrelation between Aristotle and Plato, the former being the pagan thinker whom St. Thomas is often said to have “Christianized.” (To Aquinas, Aristotle was always “the philosopher.”) And, just as the Aristotelian tradition in Catholic thought is thus traced to St. Thomas, the Platonic tradition in Catholic thought is associated with another great Doctor of the Church, St. Augustine, whose style of philosophizing was admittedly more implicit than that of St. Thomas. But these great saints illustrate a time-honored reality in the Church: The truth, in all forms in which God reveals it, will be given its due honor. Thus, both the Augustinian/Platonic approach and the Thomist/Aristotelian one are championed.

What, then, characterizes Thomist thought? It is philosophy intrinsically consonant with common sense. Certainly this is G.K. Chesterton’s evaluation in his famous book, The Dumb Ox (this being St. Thomas’s notorious nickname, given to him for apparently being a plodding student). For St. Thomas the real is just that, real. Being is being: Things exist; thus, metaphysics emerges pure and invigorated. Subsequently, as regards epistemology (properly building on ontology), St. Thomas’s system succeeds in establishing a deep resonance with the subject’s own experience: It succeeds in rendering all but tangible the modes of functioning of the mind and soul regarding objects of apprehension. Thus, the judgments which the sensory and intellectual apparatus make spontaneously are vindicated, in contrast to the violence that, for example, Cartesian epistemology would do them. The experience of being is presented as part and parcel of the inviolable and undeniable reality in which we participate by our very natures. We are not just Aristotle’s animals endowed with reason but, indeed, images of the deity who is pure uncaused being subsisting in and of itself.

Our fundamental act of knowing is identified as the natural affirmation of the intellect’s spontaneous ability to conform itself “connaturally” to apprehended objects. We are not deceived by our senses, and our minds genuinely attain to reality, if we use them correctly. In the realm of philosophy (ontology and metaphysics and epistemology), St. Thomas accordingly provides us with a full vocabulary wherewith sanely to make sense of our self-experience as existing players in creation.

But what is our actual place in this overwhelming creation of which we seem so small a part? Here, of course, we enter into the realm of theology. The crux of this matter is our status par excellence as creatures shaped in the image and likeness not just of “the god of the philosophers” but of God Himself. St. Thomas is first of all a theologian, and his focus therefore falls on the One who revealed Himself to us in Scripture.

And so it must be if we are to have real knowledge of God. An infinite being can reach down to a finite one, but a finite being cannot hope to gain by its own light more than a soupçon of knowledge of an infinite being. It is our incomparable blessing that God has revealed Himself to us. And the deposit of this gift, which can ultimately be identified with Christ Himself, is the Church of Rome. The status and nature of this deposit of faith constitutes the first and foremost focus of St. Thomas’s writings: philosophy always in the service of theology.

The heart of Nichols’s book (Part Two: The Doctrine) is concerned with St. Thomas’s work on the following topics, whose very arrangement reflects the taxonomy Aquinas favors: Revelation; God and Creation; the Trinity; the Trinity in Man; Angelology; Grace and the Virtues; and Christ, Church, Sacraments.

The last three chapters of the book are titled, “Thomas in History,” “Thomas and the Practice of Philosophy,” and “Thomas and the Idea of Theology.” Each of these chapters is a gem. Let’s consider the second. Nichols begins with an inquiry into the role Scholasticism (or Thomism) plays in today’s ecclesial climate. He gets down to business very quickly: “Church authority has pronounced directly on a number of philosophical questions closely connected with revealed faith, and on these some characteristic themes of Thomism are splendidly compatible with her parti pris: one thinks of the Council of Vienne on the soul as form of the body, or Lateran V on the natural knowability of the immortality of the soul, or Vatican I on reason’s ability to approach the existence of God. All this is barely thinkable without something very like, at least, the ‘perennial philosophy.'”

He then proceeds to cite Avery Cardinal Dulles on Pope Pius XII’s pronouncement that the philosophy proper to the Catholic Faith must safeguard “the genuine validity of human knowledge, the unshakable metaphysical principles of sufficient reason, causality [in the Thomist sense] and finality, and finally the mind’s ability to attain certain and unchangeable truth.” Thus, as Nichols’s book comes to a close, he reaffirms that Thomism is natural and proper to the Church, and demonstrates this by citing the harmony between teachings from Church councils through history and, in particular, St. Thomas’s metaphysics.

This is a wonderful and important book, short as it is, because it presents St. Thomas undiluted and with exceptional clarity. Today, when philosophy and theology have been so horrifically corrupted, particularly in academic circles, it is critical that those who would know the truth have an accessible source leading them to the Angelic Doctor. Nichols’s book is a jewel.

Although the number of bachelor’s degrees conferred in philosophy in the U.S. is small compared…

Review of The Primacy of Love and The Priority of Prudence

The hallmark of Catholic theology is that it insists on the concrete and resists the ethereal. Our beliefs are beliefs about reality.