Volume > Issue > Preparing for the Return of The Catholic State

Preparing for the Return of The Catholic State 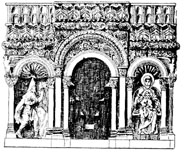 Foundations of a Catholic Political Order

David Arias Jr. is a graduate student in theology at Loyola Marymount University in Los Angeles.

Why is a Catholic State or political order necessary? And what would a Catholic State look like? These are the two core questions Storck seeks to answer. The basic answer to the first question is simple. A Catholic State is necessary because a Catholic culture is necessary. And a Catholic culture is necessary because the Catholic Faith is objectively true. Now an essential truth of the Faith is that the Incarnate Son of God, Jesus Christ, is the Sovereign King of all creation. Here “all creation” includes every single aspect and realm of creation which exists (e.g., the physical, personal, familial, social, political, economic, national, international realms). A consequence of this is that Our Lord has a moral right to be recognized, glorified, and worshiped, as the Sovereign King Who He is, by all individuals and societies. Accordingly, all individuals and societies have a moral duty, in keeping with their circumstances, to see to it that Our Lord’s right, in this regard, is honored.

One might think that what has been stated thus far sounds like mere authoritarianism and is unrelated to the genuine needs and constructive desires of the human person. Nothing could be further from the truth. For the human person has been created so that he is perfected, in his very being, by recognizing the Sovereign God for Who He is and by glorifying Him in every aspect of life. As we learn from the Catechism, our purpose for existing is to know, love, and serve God in this life, both individually and socially, so that we can be happy with Him in Heaven. Thus, it is precisely through knowing the Lord’s will and yearning to submit to it that the person is perfected and conformed to God Himself. In other words, the person can only be truly happy when he is living his life as the Lord has created him to live it. Consequently, honoring Christ as Sovereign King is not contrary to or unrelated to the human person’s fulfillment, but rather it is a necessary condition for it. Yet, as Storck maintains, this is only possible on the social level if the culture of the society is genuinely Catholic. Hence a Catholic culture and, consequently, a Catholic State is necessary.

Storck, however, draws an important distinction between the Catholic State and Catholic culture. The Catholic State is that political order “which explicitly accepts the Catholic faith as true, acknowledges its duty to honor Almighty God and seeks via its laws to protect and foster the practice of that faith.” Catholic culture, on the other hand, is that common way of life which is shared by orthodox Catholics. This culture is an externalized reflection of the Faith Catholics hold in common. Storck holds that culture includes “religion, philosophy, art, music and literature, political, economic and educational systems, but also material things, including the planning and organization of cities, means of transportation, machines, tools and utensils, types of clothing, everyday habits and customs, and so on.” Thus, in a Catholic culture, the Faith extends to and informs even the details of everyday life.

But what would this Catholic State look like? It is to this question that Storck chiefly attends. In addressing it he does not provide a description of a model “modern” Catholic State down to its specific features and individuating notes. Rather, he seeks to outline a general model or description of the Catholic State which would apply to any time and place. He attempts to describe the necessary conditions that must be met, in any time and place, in order for a State to be a Catholic State. In so doing, Storck addresses six principal topics, which form the six main chapters of his book. These are the (1) State and religious liberty (note: Storck argues that Dignitatis Humanae is consistent with preconciliar teaching; therefore, it allows for a true Catholic State where, in principle, the public expression of all non-Catholic religions could be outlawed, although, in practice, this might not be in the best interest of the common good and, thus, public expressions of heretical sects should sometimes be tolerated), (2) the framework of economic activity, (3) censorship, (4) family law and other legal matters, (5) democracy, and (6) the ultimate preservatives of a Christian culture.

In dealing with each of these matters, the author does an extraordinary job of listening to and consistently applying the Magisterium’s perennial teachings. At the same time Storck recognizes that on many moral issues there is an “all things being equal” vs. “all things considered” distinction that needs to be adhered to prudently. Thus, he often invokes the Church’s principle that, in some circumstances, a society should permit a certain evil to exist for the sake of avoiding a greater evil or for the sake of obtaining and preserving some greater good.

Storck’s treatments of his six topics are sound and clear. To give the reader a taste of his reasoning, I’ll briefly look at one issue that arises in his discussion of family law and other legal matters. In this context Storck asks which kind of technology ought to be permitted in the Catholic State. In order to make any rational judgment on this matter we need a rational standard. Storck presents us with such a standard. In a Catholic State there ought to be “a spirit which, instead of welcoming everything new, attempts to judge whether new things truly serve the purpose of technology, namely, whether they allow us to devote more of our time and energy to our spiritual, intellectual, family and social lives without injuring the social body or the environment in any way. If they do, then admit them to the state; if not, do not admit them.” This argument for the limitation of technology is not the reasoning of a Luddite but rather that of a man with a deep sensus Catholicus. It is precisely this sensus that pervades this significant and much needed book.

To his project there is one large and obvious objection, which Storck anticipates: Why write such a book as this when there are no Catholic States and no prospect of one arising? In response Storck provides two reasons why an exposition of the nature of the Catholic State is not useless. “First, an attempt to delineate truths, no matter how far from a foreseeable application, is never vain, since it is never vain to set our thinking in order; and second, it may be that in future centuries Catholic cultures and Catholic states will again become realities, and thus our thinking about what they should be like may perhaps make some small contribution to the work of our descendants in the Faith.”

Free enterprise in its earlier stage was the unwitting and ungrateful beneficiary of generations of hardworking, God-fearing people.

Comments on the First Draft of “Catholic Social Teaching and the U.S. Economy”

The average Catholic will ask himself, “What can I and my parish do for economic justice? How should my spiritual life affect my social behavior and my habits of consumption?”