Volume > Issue > Blessed Are the Shack-Ups 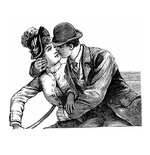 By James F. Csank | September 2007
James F. Csank is a retired attorney living in Seven Hills, Ohio. His writings have appeared in The St. Croix Review and The Human Life Review.

The June 2007 issue of U.S. Catholic magazine contains an article titled “A Betrothal Proposal.” It is written by Michael J. Lawler and Gail S. Risch, who are described as “two respected family ministry researchers” at the “Center for Marriage and Family at Creighton University, Nebraska, where they also teach theology.” The article’s headline asks, “Are cohabiting Catholics always ‘living in sin’?” Lawler and Risch’s answer has two parts: (1) not always, and (2) let’s change the rules so that they never are.

The authors acknowledge that cohabitation — you know, shacking up — is on the rise, and has become “a conventional and socially endorsed reality.” Catholics have not been immune to this trend: “Recent focus groups of young Catholic adults on ‘problematic aspects of church teaching’ found that they disagreed with church teaching on premarital sex and cohabitation and do not see a fundamental difference in a loving relationship before and after a wedding.”

When Lawler and Risch say “recent focus groups” they mean young, unmarried Catholic adults who want to enjoy sex without marriage and without feeling the guilt brought on by Church teachings that, our authors assert, “ignore the variety and complexity of the intentions, situations, and meanings couples give to cohabitation and its morality.” Notice that, for Lawler and Risch, the morality of an act is given to it by the actors, not by God, not by His Natural Law, and not by the Church.

Notice, too, that to these “Catholic” adults, a wedding adds nothing to their relationship.

Exit the Sacrament of Matrimony.

Lawler and Risch want to smooth over these problematic aspects and disagreements. They are concerned because the “current pastoral responses to cohabiting couples” are “both uninformed and outdated,” which are very bad things to be. Their “pastoral response” does not involve counseling such people to avoid sin, but rationalizing sinners’ behavior so that they view themselves as not actually sinning. Thus, Lawler and Risch proclaim: “Our experience with young adults leads us to doubt the claim that they are living in sin.” Do Lawler and Risch claim the ability to see into souls, as God does? Their statement means nothing more than: We don’t believe premarital sex is wrong.

Amoris Laetitia: What Is Pope Francis Up To?

Measured by its social impact, Amoris Laetitia is the most important Church document since Humanae…

Why do the Baptists have the highest rate of divorce?