Volume > Issue > Will There Be Marriage in Heaven? 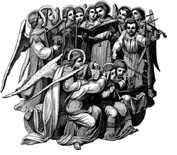 WHAT GOD HATH JOINED TOGETHER

After his wife died, C.S. Lewis kept a diary in which he diligently recorded all the ways he experienced grief at her passing — his thoughts, his feelings, his emptiness, and his longing for her. It was later published as a book entitled A Grief Observed (1961). I read that book after Miriam, my wife of 58 years, died suddenly and unexpectedly, asleep in her reading chair. It gave me some degree of consolation to read my own emotions, feelings, and thoughts so articulately expressed. Particularly pertinent to me was Lewis’s picture — identical to my own — of a heart torn apart by death, yearning to be made whole again in Heaven. He longed for a substantive basis to believe it would be so, a basis more solid than the glib assurance that, as the old hymn goes, they would “meet together on the other shore.” Lewis’s diary ended before he recorded whether he had found the consolation he sought.

But the issue of whether I would be restored to unity with Miriam in Heaven was one in which I, unlike Lewis, did not doubt. A cradle Catholic, I had believed since childhood that I would be reunited personally with my deceased family members after my death. So did Miriam. So did most Catholics I knew, though we expressed it infrequently, on occasions when the subject arose, usually at funerals. I do not recall that it was taught specifically as doctrine. More likely, we inferred it from the teachings about the Communion of Saints. Whatever the source, that belief was commonly held, as though it were part of a Catholic’s DNA.

What’s more, my belief goes further than a future reunion. I also believe that my wife — still my wife — continues to guide me from Heaven as she did on earth, not just by her prayers but through my daily conversations with her. That twin belief, that we remain in spiritual communion now and look forward to full reunion in Heaven, has been my consolation through this period of “alone-ness” that has characterized my life since Miriam’s death seven years ago.

Thus, I was taken aback when a recently widowed Catholic woman with an advanced degree in theology vigorously challenged both these beliefs. She told me, firmly and with absolute certainty, that they were wrong. Not arguable. Wrong. My marital relationship ended when Miriam died. Period. “There is no marriage in Heaven,” she proclaimed, citing Jesus as her authority (cf. Mt. 22:29-33). To my dismay, several priest friends subsequently told me they agreed with her.

According to the "Prophecies of St. Malachy," only two popes would follow John Paul II: "De Gloria Olivae" (the Glory of the Olive) and "Petrus Romanus" (Peter the Roman).

False doomsday prophecies and other gross theological errors that present faith as delusional and oppressive can taint all forms of Christianity and implicate all Christians to some extent.