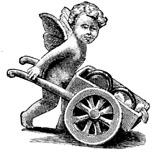 There is a legend that a thousand years after the birth of Christ, Prince Vladimir of Kiev endeavored to discover which of the great religions was best. Islam forbade the use of alcohol and the Jews lived in exile. Both Latin and Greek Christianity were deemed acceptable, but the Byzantine Church in Constantinople had a liturgy and church buildings so beautiful that the Prince’s emissaries recommended that he and all his subjects become Orthodox Christians. “We knew not whether we were in heaven or on earth,” was their report concerning what they had experienced in Constantinople.

As a college student, I too was deeply moved by the beauty of the liturgy. I was not a Christian, but a student of comparative religion. As part of an assignment for a course on ritual, I attended Mass at the local Catholic parish, which also happened to be the home of the archdiocesan choir school. I heard the Mass sung, and listened to hymns that filled the church and echoed from the walls. I watched Catholics repeat the gestures and words of countless generations. More than a few times I choked on my own tears. It wasn’t long before I became a Catholic. As I walked down the aisle of the church at the Easter Vigil on my way to the death and rebirth of baptism, the litany of the saints was being chanted, and it seemed as if the words and melody formed an archway to shelter and guide me as I approached the sanctuary.

I was not surprised when I learned that Thomas Merton too had been converted, at least in part, by beauty. Nor was I surprised when a Dominican priest with whom I was working told me of his own conversion: He was sitting down to eat his lunch in a large cafeteria of some 300 people when he saw a young man on a far side of the room make the sign of the cross before beginning his meal. “And I knew right then that I had to be a priest.” Even this simple gesture could become transparent with the beauty of worship, in which we see, albeit dimly, the beauty of God Himself.

The Church herself teaches that this beauty, the beauty of the liturgy, is no accident. Nor is it merely sensory. It is metaphysical for, as the Second Vatican Council teaches, “in the earthly liturgy we take part in the foretaste of that heavenly liturgy which is celebrated in the Holy City of Jerusalem” (Lumen Gentium, #8). The eucharistic prayer makes the same point when it announces that “we sing with all the choirs of angels” — the angels who see God face to face.

'Friendly' Fire Does the Most Damage In the Catholic Civil War

The CDW cardinal's letter affirms that it is "completely appropriate" to kneel to receive Communion. Kneeling is not forbidden. No priest or bishop can force us to stand.

Our kneelers make our gesture of worship an obeisance without making it a physical punishment. That seems legitimate.

The Dubious Pedigree of Touchie-Feelie Catholicism

Modern Catholic liturgists have tried to graft the “fellowship experience” onto the Mass, but it hasn’t worked.