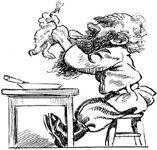 By Eric Jackson | April 2019
Eric Jackson is a software developer who lives in St. Paul, Minnesota, with his wife and their two children. His work has previously been published in Saint Austin Review.

In the dreary, flat world of Thomas Friedman, most of our cultural practices are affectations. Yet remnants of true culture can still be found. Last Advent my wife and I attended the annual lutefisk dinner at Mindekirken, a Lutheran church in Minneapolis where her maternal grandfather once served as pastor. Lutefisk is a culinary oddity courtesy of the Scandinavians who settled Minnesota, though some trace it to Norway. At my inaugural dinner, the wizened elders informed us neophytes that it was a food the immigrants had devised to get them through the cold winters. Like most concoctions borne of necessity, lutefisk is a simple enough dish: whitefish preserved in lye. The finished product combines a gelatinous texture with a strong fish smell and a slight fish taste. It can be served topped with melted butter or a cream sauce that does more to mitigate the flavor. My wife’s grandmother, of pure Norwegian blood, expressed her approval of my wife’s preference for melted butter, while I drowned my fish in cream sauce and secretly offered up my Protestant feast for the poor souls in Purgatory.

Lutefisk, then, is something of an acquired taste, which is not to say such taste cannot be acquired. My wife boasted to a man at our table that this was her fourth lutefisk dinner — she meant overall — to which he replied that this was his seventh — of the season. There’s a market of sorts for connoisseurs to make the circuit, like Catholics with our Lenten fish (which we have good enough sense to fry).

I can’t vouch for the other lutefisk dinners, but the distinctive character of the patrons at Mindekirken was charming. One could easily imagine the small band of Norwegian Americans who lived near and worshiped in this church. Yet the crowd saddened me too. It was too old; or rather, it lacked sufficient youth. It was as if the slow death of a distinctive culture were being presented to me. Mindekirken is one of two remaining American congregations that still use Norwegian as the language of their church services. Many of its members came from Norway as children, or are the children of those who did. But their children are to be found elsewhere.

At the time Mindekirken was built in 1922, Catholic churches were still using Latin. Worshiping in the vernacular was Protestant. Worshiping ad orientem, however, was a shared custom, which, to my surprise, is retained at Mindekirken. The whole church is, in fact, strikingly traditional. Their founder’s rebellion against Rome might have produced a bout of vandalism, leading to the destruction of church buildings and art in Germany and the low countries, but by the time Norwegian immigrants came to found this church, iconoclasm was a distant memory, and they built beautifully.

I’ve been a lay minister for some 50 years — as a student, waitress, wife,…

As a practice of personal piety, the laity may use the posture of prostration as an expression of humility only in private.