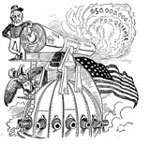 NOTES FROM THE WORD CEMETERY

By Frederick W. Marks | October 2019
Frederick W. Marks is the author of ten books, including, most recently, Confessions of a Catholic Street Evangelist and Pro-Life Champion: The Untold Story of Monsignor Philip J. Reilly and His Helpers of God’s Precious Infants.

Words are fascinating. Like people, they are born on a certain day and, at a certain point in time, they pass away. Whenever I come across something verbally archaic, I jot it down in a little brown notebook that I call my “word cemetery.” At the end of my notebook is a section devoted to vocabulary that is new. If anyone asks me why I’m so interested in verbal comings and goings, I point to my gray hair and tell them that I grew up during the 1950s.

None of us had “issues” back in those days. “Arguments” and “disagreements,” perhaps, but never issues. We “hung our clothes out to dry,” we “saved for a rainy day,” and when we went shopping we took care not to be “snookered” or “hoodwinked.” To address a group of girls as “you guys” would have been unthinkable. “Xerox” was not yet on the radar screen, but we were familiar with “carbon copies.” A fellow whom we liked was “a good egg,” and if an hombre repeated himself too often he sounded “like a broken record.” Few members of today’s younger generation have ever heard a phonograph record, let alone one that is broken.

You might suspect, by now, that I am something of an antiquarian. If so, you are right. Call me an “old fogey,” if you like. There is one thing, however, that I wish to make clear. In dealing with shifts in word usage and custom, my concern is more for the present than the past because I fear for the future of our country. Seared in my memory are the words of George Washington’s Farewell Address: “Morality is a necessary spring of popular government,” and “only with caution can we indulge the supposition that morality can be maintained without religion.”

The question is where we stand in relation to Washington’s claim that godlessness leads to immorality, and immorality to a breakdown in democratic governance. It is no secret that American political parties have moved further and further apart ideologically, fueling suspicion and animosity. Not since the Civil War has there been such hatred for one side by the other. Why? Clearly, there has been a marked increase in atheism and churchlessness. Yet I have heard people say that we are no less virtuous today than we were 70 years ago, that evil is evil, regardless of time and place. I am of a different opinion, and I stake my case on a comparative study of custom and word usage, one that is based on personal, firsthand observation.

A war is being waged for the soul of America, and Catholics are on the…

Can someone who has ignored every proscription of the Catholic faith be described as being on a "faith journey"?