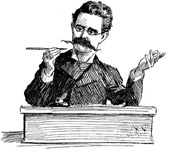 "WE USE MORE SULFURIC ACID THAN YOU"

By Thomas Storck | November 1999
Thomas Storck is a Contributing Editor of the NOR and author most recently of Foundations of a Catholic Political Order, published in 1998 by Four Faces Press in Beltsville, Maryland.

Archbishop Francis George of Chicago made a startling statement during the Synod of Bishops for the Americas in November 1997. Archbishop (now Cardinal George) said that U.S. citizens “are culturally Calvinist, even those who profess the Catholic faith.” American society, he continued, “is the civil counterpart of a faith based on private interpretation of Scripture and private experience of God.” He contrasted this kind of society with one based on the Catholic Church’s teaching of community and a vision of life greater than the individual.

Cardinal George’s remarks deserve thorough consideration, and need some unpacking. We are no longer accustomed to thinking in such terms as “Catholic culture” or “Calvinist culture.” There aren’t many honest-to-goodness Calvinists (or Puritans) left in America, but the Calvinism of early America went a long way toward putting an individualistic stamp on America as we know it today. In this sense we all are part of a Calvinist culture, however secularized. As for the notion of community, it has been so misused since the Second Vatican Council that the very term is now suspect in the eyes of solid Catholics. But in fact both the idea of culture and the idea of community are valuable means for understanding the ways in which society and religion interact, and thus for understanding how our faith affects, or fails to affect, our own life and the life of our society.

A society or culture tends to reflect in a larger pattern the dominant religious beliefs of its members. For example, two of the most basic articles of the Catholic faith are the Holy Trinity and the Incarnation, and both involve the concept of community. The Trinity is itself a community of Persons and the doctrine of the Incarnation leads to the doctrine of the Church, the Mystical Body of Christ, the extension of the Incarnation. St. Paul describes the Church as one body made up of many interrelated members with different functions — in fact, a community of persons linked in the most intimate way possible, since we are all members of Christ Himself. From the doctrine of the Incarnation comes that wonderful union of the Divine and the human which is one of the hallmarks of Catholicism. Thus, just as the Divine Word brought the Infinite and Timeless Majesty of God into human form at a certain time and place, so Catholics are ready to incarnate their faith in objects and places, everything from blessed medals to shrines — sacred but still material — just as God the Son did not think it incompatible with His Divinity to actually experience our material condition.

It is certainly the case that some Catholics have promoted a false notion of community, as if we could have community without God or as if a community inside a church building were the primary locus of the Divine. But the best way to create a community is to look toward God. Christ formed the Church as His Mystical Body, and no amount of standing around and holding hands could ever have done so. But on the other hand, since Jesus Christ has constituted us as His Mystical Body, we naturally exhibit that unity in outward forms, as Catholic cultures have always done in their processions, pilgrimages, and festivals, just as these same cultures have exhibited the concreteness of the Incarnation by consecrating shrines and holy places to show that God and the life of mankind are not separate from each other.

Lasch’s views on feminism and environmentalism illustrate his expressed intention to transcend the political ideologies of both Left and Right.

Elderly folks I once knew were proud of their indifference to the urban American world and its culture, its values and habits, of which they occasionally heard from their children.