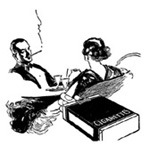 OUR NATIONAL EXPERIMENT IN POLITICAL SCHIZOPHRENIA

By John Lyon | April 2018
John Lyon has held teaching and administrative positions at several universities, including Notre Dame, Ball State, Kentucky State, and St. Mary's (Minnesota). More recently, he taught literature and history at a classical academy in Wisconsin. He has also farmed, raising berries, flowers, vegetables, and apples, and operated a stall at the local farmer's market in Bayfield County, Wisconsin.

“The first thing that strikes the observation [of the modern democratic world] is an innumerable multitude of men, all equal and alike, incessantly endeavoring to procure the petty and paltry pleasures with which they glut their lives…. Above this race of men stands an immense and tutelary power, which takes upon itself alone to secure their gratifications, and to watch over their fate. That power is absolute, minute, regular, provident, and mild.” — Alexis de Tocqueville, Democracy in America

We, the people of the United States of America, are a people conceived in liberty and born in parricide. It ought to be no surprise then that, from the beginning, we have not been of one mind. We are internally contentious, in foreign policy uncertain. In religion we have ever been fractious, our sectarian and denominational divisions added to expectable class and economic tensions, supplemented by regional rivalries, and all suffused by racial divisions.

We — even the referent of the plural pronoun is uncertain. What, or who, are we? Children of an idea, quite maculately conceived in liberty as well as regicide? God’s chosen ones in our city upon a hill? A predictably accidental, conglomerate function of geography? Self-selected members of the world’s greatest plunderbund? The wretched refuse of others’ teeming shores? We are a disparate people, at any rate, oscillating between compromise within the limits of assumed but not thoroughly examined basic principles and civil war. We have been held together for a time by a hegemonic sociopolitical class with a semi-permeable periphery, the aristocratic functions of which have been to prevent organized fratricide.

The divine right of kings largely evaporated in the English-speaking world between the 1640s and the 1780s, and with it went, in this country, any legally heritable rank and order. When we killed our father the king (1776-1783) and then refused to replace him with a successor of even symbolic significance, we settled into our regicidal peace as a band of brothers, nominally equal at law and in rights. (This was the case even though, for instance, the document that constituted us specified that some brothers were really only three-fifths the political equivalents of others.) No apodictic claims could be made by any individual, family, or class to a “right to rule,” the God of revelation having publicly perished along with the right hand of the monarchy. Despite, or in addition to, the immensely important inheritance of British common law, such civil rights as we had were now to be derived “from nature and nature’s god,” generalities that were to prove no less abstract and malleable than those of the divinity that previously issued rights to kings.

Although this move toward democratic equality might have been politically necessary, given the logic of the times, it was also the first move toward democratic totalitarianism: divide God from nature, except as a function, a derivative thereof; make belief in divinity a private matter, belief in nature public. The public belief in nature will slide away also, for the playing field in democracies is not level; it slopes downward to the Left, and that is where all significant action takes place, in the absence of strong counter-measures by the Right.

The Intellectual Battle over the Puritan Legacy

The founders of Massachusetts believed, Miller says, “that ultimately all the world would imitate New England.”