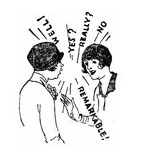 AN AMORPHOUS & ILL-DEFINED TERM AND EVENT

Hey, kids! Can you feel the excitement? The Catholic Church is sponsoring another synod, a Synod on…[drum roll]…Synodality!

Kids, can you hear me?

This synod will be a fun-filled, two-year process, culminating in a way-cool apostolic exhortation from everybody’s favorite pope, Papa Francesco, in 2023!

Hello? Is anybody out there?

What’s wrong with kids today? Why aren’t they giddy about a Synod on Synodality, wonders Massimo Faggioli. “If synodality can’t get young people interested in the Church, then what can?” he writes in Commonweal (Jan. 28).

The “synodal process,” Faggioli writes, “proposes a rebalancing of power, not only between lay and clergy but also between elites and the people.” Isn’t that what “the youth” are supposed to want, especially the college-age crowd?

Faggioli can’t seem to fathom that the interests of young Catholics lie elsewhere. “Students,” he laments, “were once the engine of social change, but now they seem to be laser-focused on their studies and myriad extra-curricular activities (clubs and teams, attending sports events).”

Yes, once upon a time, students were the engine of social change. That was in the salad days of the 1960s, to which liberals like Faggioli look back longingly as the era extraordinaire of righteous social movements. How dare college kids today focus on their education and — egads — sports!

But those salad days never entirely ended. More recently, student activism experienced a mini-revival, latching onto the broader Occupy and Black Lives Matter movements for “social change.” So, why the lack of enthusiasm for a Synod on Synodality?

Our struggles in the U.S. are a far cry from the hard persecution that our coreligionists elsewhere in the world face on a routine basis.

“I have read The Betrothed, by Alessandro Manzoni, three times, and I have it now…

Silence of the Shepherds

ISIS capitalizes on the West's ignorance of its own history. The Pope and bishops should allow competent theologians and historians to publicly defend the faith against Muslim propaganda.