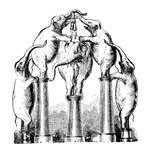 Zen & the Artifice of Vatican Diplomacy

Joseph Cardinal Zen Ze-kiun has been a leader and moral light of the Catholic Church in China since his ordination in 1961. During that time, the nation’s communist regime has consistently and forcefully persecuted faithful Catholics. As such, the 86-year-old archbishop emeritus of Hong Kong can be forgiven for protesting that he has yet to be consulted by the Vatican’s diplomatic squad about a proposed “deal” they are poised to strike with the Chinese government regarding the appointment of bishops. Zen, in a February 27 personal blog post (oldyosef.hkdavc.com), warns that the Vatican-China deal is an act of ecclesiastical “suicide” and a “shameless surrender” to the communist regime. He describes the deal as “compromises without limits” on the part of the Vatican that yields little in return for the Catholic faithful. Specifically, the deal would legitimize the communist regime’s episcopal appointments, a move that has wide-ranging ramifications for the Church.

Currently, Beijing recognizes only those bishops who are members of the state-approved and state-monitored “patriotic association.” Beijing does not recognize bishops appointed by the Vatican; in fact, it actively persecutes them. In 2016 alone, five Vatican-appointed bishops who had served time in Chinese prisons or labor camps died either while interned or from health complications arising from their internment. As it now stands, the authentic Catholic Church — the one with Vatican-appointed bishops — is an underground Church, and the state-run Chinese church is not in communion with Rome. But it looks like that could soon change. As Cardinal Zen understands it, through sources close to the situation, “If the deal is reached, the Vatican is expected to officially recognize seven bishops who are out of communion with Rome, including two to three whose excommunications have been explicitly declared by the Vatican.”

It is instructive to note that the new Vatican-China deal comes at a time when China is cracking down on Church attendance, banning everyone under 18 from participating in any kind of religious service, including Catholic Masses, youth group activities, Bible studies, catechetical classes, or summer camps, whether or not they’re held in a church building. And, although adults are permitted to attend religious services, strict rules limit when and how long they can stay in church buildings. “The Holy See is helping the authorities of the government to do this,” Cardinal Zen explains in his February 24 blog post.