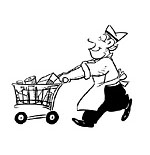 STUCK ON THE HEDONIC ESCALATOR

By Eric Brende | April 2011
Eric Brende is the author of Better Off: Flipping the Switch on Technology (HarperCollins; now in its twentieth printing). A graduate of Yale and MIT, he has adapted Amish lessons to urban life in old St. Louis. If you're ever in town, stop by the Soulard Market on Saturdays, where the Brende family sells their soap, and take a ride in Eric's rickshaw. If you'd like to visit the Brendes' urban vertical-gardening oasis, make a rickshaw appointment, or order an autographed copy of Eric's book, please let them know by calling 314-773-6227. This article originally appeared in somewhat different form in Disorientation: The 13 "Isms" That Will Send You to Intellectual "La-La Land," edited by John Zmi­­­rak (Ascension Press; www.disorientationbook.com), and is reprinted with permission.

Conspicuous consumption has lost some of its former allure. For generations after Thorstein Veblen identified the phenomenon among the “leisure class,” people were proud of their material wherewithal and were eager to flaunt it. You built your big house on a big boulevard. You wore your fur coat, as it were, on your sleeve. You visited the opera not for cultural enrichment but to show you are rich. As soon as others could afford to do so, they followed suit. And so we became a society characterized chiefly by mass consumption, or maybe mob consumption, since it became socially obligatory to keep pace.

But a weird reversal has begun. We consume more than ever, mind you — a “poor” person today revels in technological amenities no one could imagine in Veblen’s time. And yet a certain uneasiness has entered in. Few speak openly in favor of rabid, acquisitive behavior. When President Bush urged us to go shopping after 9/11, the comment dropped like a stone. Increasingly, ostentatious accumulation of stuff carries a stigma from which Church, state, and media, in one way or another, all recoil.

Of course, it has never been considered Christian to glut oneself on food or material things. But lately it has also become unfashionable, politically incorrect. It doesn’t even accord with FDA recommendations on diet. President Obama sets himself apart from his predecessor, to a degree, by projecting the aura of a thrifty, “green” president, and his wife, Michelle, explicitly devotes herself to reducing consumption, at least at the dinner table, in her campaign against obesity.

None of this has kept us from sinking more rapturously into the arms of Uncle Mammon. Consumerism is the national open secret, the scarlet letter everybody wears under the lapel or purse flap. As we all know, raising the Gross Domestic Product, and with it the Consumer Spending Index, is the key to Obama’s re-election, and it may well be the de facto linchpin of national economic recovery — global warming be damned. Whenever economic indicators wobble this way or that, newscasters pant, breathless in the hope that more housewives may be driving to Target.

Michael Novak is a remarkable phenomenon, and in many ways admirable. A man of prodigious…

Obsession with work and “workaholism” produce dangerous effects that lead to a desensitizing, deadening, and dehumanizing of the spirit.