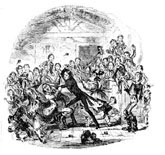 LET THE DEAD BURY THEIR DEAD

By Preston Jones | July/August 2001
Preston Jones, an Anglican, taught in the California State University system from 1997 through June 2000. He now teaches history at Logos Academy, a Christian preparatory school in Dallas, Texas.

Introduction by the Deputy Editor

The university is supposed to be a “free marketplace of ideas” — a place where ideas are allowed to compete unimpeded, where the fundamental task of professors (outside the hard sciences) is to provide the student with the analytical tools necessary to engage contending ideas on his own terms.

But increasingly, professors are turning into salesmen, and the tools they provide are no tools at all, but prepackaged worldviews — ideologies that demand intellectually unprepared underclassmen to interpret ideas through the blurred lenses of favored classes, races, and genders.

And if they refuse, their grades suffer.

I confronted the hard-sell tactics used to ensure adherence to the “correct” worldviews while taking a course on the Sociology of Law during my four-year odyssey through the University of California at Berkeley. Our final paper assignment was to analyze the impact of the law on a social movement, and the utilization of the law as a means to advance that movement’s agenda. I chose to write on abortion, and, despite my prolife convictions, I intended my paper to be an objective overview of the dueling movements on either side of the issue. But as I learned, objectivity in relation to such a controversial issue has no place in the halls of academe.

In my topic statement defining the parameters of the paper, I stated my intention to “address the issue of abortion as a legal phenomenon with corresponding social movements,” to include “the legal history of abortion, the juxtaposition of the pro-choice and prolife movements, and the problems arising from the discourse from both sides of the debate.” Pretty straightforward. And mission accomplished, as far as I was concerned.

Why the System of Public Education Is Irreparable

We lack belief in the kind of grand narrative that alone can lend coherence to our studies and our lives.

Daily we hear of intemperate students demanding this or that “right” drawn from a grab-bag of potential claims on others’ behavior.