Volume > Issue > Where Has All the Latin Gone? 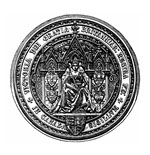 Where Has All the Latin Gone?

THE LANGUAGE THAT BUILT THE CHURCH

By Mark Cole | November 2007
Mark Cole writes from Warren, Pennsylvania. If you would like to receive a trivial Latin e-mail on a highly occasional basis, please contact him at thelatinbumbler@yahoo.com.

It hardly seems necessary to note that Latin no longer occupies the same place within the Catholic Church that it once did. Not that the average Catholic worries much about it; all he’s noticed is that the Mass is no longer said in Latin. Yet the decline of Latin reaches deeper into the heart of the Church than that, deep enough that it has changed the Church in profound ways.

Consider one obvious example: the Catechism of the Catholic Church was composed in French, released in multiple translations within a very short period of time, and then, after several years of disputes over certain passages, the Church finally prepared a Latin “typical” edition, on which all the other versions were supposed to be based. Sadly, this is not an anomaly. The same unwieldy process has become the norm for Church documents (although in most cases no corrected vernacular translation will ever replace the original versions).

Latin was once more than just the language of the Mass. Latin underlay the entire culture of the Church. It was the language in which the popes wrote their encyclicals, the language used by philosophers and theologians, the language of Canon Law and Church documents, of St. Jerome’s Vulgate Bible. Priests and religious from all over the world spoke to one another in Latin. The writings of the great Western saints and spiritual masters, the rules of religious orders, and the Western Church’s vast treasury of hymns, poems, and prayers were all composed in Latin. Beneath it all lay the solid bedrock of Roman culture — of Virgil, Juvenal, and Cicero — which the Church had cherished almost as tenderly as her own offspring. Latin was the true language of the Church, a language that could always be relied upon to convey precise information because its meanings were fixed.

We tend to think that a translation is the same as the original. However, no matter how good a translation may be, some of the original meaning always gets lost along the way. An old Roman proverb put it more starkly: translator, traitor. Latin only makes this problem worse with its rather small vocabulary and often startling number of alternate meanings. These meanings can diverge extravagantly from the English-language meanings associated with the same concept, leaving the translator to sort out which best fits the original intention. The Latin author might even have had more than one of these meanings in mind. In some Church documents, words have been so badly translated that they obscure or even reverse their original meaning (I refuse to speculate whether this is deliberate or not!).

Do Not Make Me a Gentile

The following blessing is recited every day by Jews: "Blessed are You, L-rd our G-d, King of the Universe, who did not make me a Gentile."

Our Churches Will Be Empty -- Part II

"It is our duty to be vigilant... Because, in the end, the people will assist at the Tridentine Mass and our churches will empty."