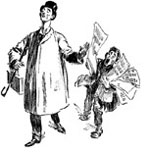 When the “Shorter Form” Is The Politically Correct Form

You may have noticed that in the readings of the Lectionary at Mass there is sometimes a “Longer Form” and a “Shorter Form” of the same reading. Sometimes the Longer Form is quite long, and we recognize that for reasons of time it could be advisable, once in a while, to use the Shorter Form.

But at other times the Longer Form isn’t very long at all, and the Shorter Form just deletes a few verses. So why have a Shorter Form? In certain cases it’s obviously so as not to run afoul of Political Correctness.

So, for example, in the Second Reading for the Twenty-First Sunday in Ordinary Time, Cycle B, the reading is from Ephesians 5:21-32, not a long reading, where St. Paul says, “Wives should be subordinate to their husbands…,” and then states the reasons for that (vv. 22-24). But the Shorter Form omits those unfashionable verses and only tells us about a husband’s duty to his wife. This is blatant censorship and cowardly pandering to the Zeitgeist. Apparently, the people who put together the Lectionary figured that the ordinary Catholic in the pew is so dumb or indifferent that he’d never bother to check to see what was omitted, and that he’d be just grateful to be able to leave Mass fifteen seconds earlier.

Another example of cavalier censorship occurs in the Gospel Reading for the Twenty-Eighth Sunday in Ordinary Time, Cycle A, which is the Parable of the Marriage Feast (Mt. 22:1-14). Again, the reading isn’t long. Here Jesus tells us that the Kingdom of Heaven may be likened to a king who gives a wedding feast for his son. The king sends his servants to bring guests to the feast, but the guests refuse to come. So the king sends his servants out a second time. This time those invited ignore the invitation or kill the servants. So the king burns down their city. Then the king sends out other servants to invite others, “bad and good alike,” with the result that “the hall was filled with guests.” Thus ends the Shorter Form, and on a cheery note. Everyone lives happily ever after. But the Shorter Form omits the rest of the story, a mere four verses (vv. 11-14), and those four verses are crucial: At the feast, the king discovers a man who is not dressed in a proper wedding garment. The king interrogates the man, who has no response. So the king says to his attendants, “Bind his hands and feet, and cast him into the darkness outside, where there will be wailing and grinding of teeth.” And Jesus, after telling the parable, concludes: “Many are invited, but few are chosen.” So the parable doesn’t have a happy ending after all.

The wedding garment symbolizes the proper response to grace. And of course when Jesus says “few are chosen,” He is referring to Judgment Day.

My, the difficulties of inclusivity are well-nigh preternatural