Volume > Issue > What & Where Is the Holy Grail? 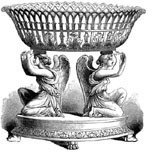 What & Where Is the Holy Grail?

By Charles A. Coulombe | December 2018
Charles A. Coulombe, who writes from Los Angeles, is the author of Vicars of Christ: A History of the Popes (Tumblar House), The Pope’s Legion: The Multinational Fighting Force That Defended the Vatican (St. Martin’s Griffin), the novel Star-Spangled Crown: A Simple Guide to the American Monarchy (Tumblar House), and the recently released A Catholic Quest for the Holy Grail (TAN Books).

In many ways, the Middle Ages are still with us. This might seem obvious to orthodox Catholics and citizens of the United Kingdom and the 15 other nations over which Queen Elizabeth II reigns. It is most forcefully represented for the former by the liturgical use of Latin, the ongoing relevance of the medieval scholastics, and indeed, the papacy itself (despite the best efforts of some of its more recent occupants). The latter is exposed to it by the panoply of the monarchy, with its ceremonial heraldry, civic ritual, hereditary peers, and much else. But in all European countries and their daughter nations across the globe, traces are found in academic regalia, the law (even here in the U.S. we still have law Latin and law French), and the structures of government — from American sheriffs, counties, coroners, notaries public, and so on, to the French Council of State and Court of Auditors (both of which bodies trace their descent from the medieval Curia Regis, despite the Revolution) and to folklore, architecture, cuisine, and topography. Meanwhile, medieval re-enactment has become ever more popular, as witnessed by the growing number of attendees at the various Christmas revels, Renaissance faires, and Society for Creative Anachronism events. Recall the excitement just a few years ago throughout the Anglosphere surrounding the recovery and re-interment of the remains of King Richard III. Of all this cultural wealth, perhaps the most popular is the Arthurian legend. Out of that entire saga’s massive collection of motifs, perhaps the one most bewitching to the modern mind is the Holy Grail.

One of the reasons for the Holy Grail’s popularity in the current psyche is that the protean nature of its relatively late appearance allows us (as with much else in Arthuriana) to read our deepest desires into the narrative. As French poet Chrétien de Troyes and his contemporary continuators wrote it, the Grail might be a cup or vessel used by Christ at the Last Supper for the very first act of transubstantiation (and if a cup, used by St. Joseph of Arimathea to catch some of the blood that flowed from His side). Or, as in Wolfram von Eschenbach’s epic 13th-century poem Parzival, it might be an emerald that fell from Lucifer’s crown and upon which the Eucharist daily appeared. Or it might be a book. When seen at the fabled Grail castle of Arthurian literary tradition, it appeared in company with a bleeding lance — the spear that had pierced Christ’s side after His death. Otherwise, it might appear as it chooses on its own — as at Camelot one Pentecost, whence it inspired the Knights of the Round Table to go on a quest for it.

In recent times, this vagueness has been used as a palimpsest of sorts, whereby — depending on your own spiritual interests — you could compose your own myth: The Grail was really a bloodline of secret descent from our Lord and St. Mary Magdalene. Or it was an alternative scripture of the heretical Cathars. Or maybe it was some esoteric secret picked up by the Knights Templar in Palestine and either smuggled to North America or used to help found Freemasonry. Perhaps it was an updating and Christianization of the mythical Celtic “Bowl of Plenty.” Or it might represent your own highest spiritual aspiration, whatever that is. Perhaps it was concealed in the Apprentice Pillar at the mysterious Roslin Chapel in Edinburgh, Scotland, or hidden in the depths of the Chalice Well at legend-haunted Glastonbury Tor in Somerset, England.

Certainly, all this esoterica has led many modern Catholics to look askance at the Grail legends, as though they were somehow connected intrinsically with heresy. Such ought not to be the case. The orthodox Catholic of today can read the Grail romances the way their authors meant them to be read.

I have preached parish missions and retreats around the U.S. and Canada since 1975. It…

Modern man wants a form of worship that is both understandable and predictable. And, because grace is the fruit of worship, this implies he wants his grace without mystery.