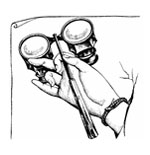 AN OPERA FOR THE IGNORANT

There are at least three reasons why I shouldn’t be writing this article. First of all, I have not seen Luc Bondy’s production of Tosca, which inaugurated the New York Metropolitan Opera’s 2009-2010 season, though I did watch the PBS broadcast in December: Those who’ve seen both tell me the versions differ significantly. Second, although I sang in choirs from childhood to young adulthood and continue to cultivate a keen interest in music, I am not a professional critic. And third, it would seem that those called to preach the Gospel would have infinitely more important things to do than write about the fantasy dream-world of opera.

But write this article I shall. Why? Because I’ve heard and read enough about Bondy’s Tosca to know that the issue at hand is not so much this particular production, or even the increasingly strained relationship between Christianity and art, but rather a director and general public’s utter ignorance when it comes to interpreting works tinged with a spirit of Catholicism. Though opera is a fantasy dream-world, it is serious stuff; in the case of this particular Tosca, we have a fine example of why the “they never would have gotten away with this against the Muslims or Jews” reaction is not the only way, or even the best way, of responding to the barrage of blatant offenses against the Catholic Church.

First, the facts. Franco Zeffirelli of Jesus of Nazareth television-miniseries fame, who held the monopoly on Tosca at the Met for nearly a quarter of a century, has been phased out to make room for Swiss director Bondy. After the performers and musicians were warmly applauded at the conclusion of the September 21, 2009, premiere, Mr. Bondy and members of his production crew took the stage — only to be subjected to boisterous booing. On the surface, it seemed the public was not ready for Bondy’s simple, stark set designs after growing accustomed to Zeffirelli’s stunning and realistic reconstructions of the famous Roman sites in which each of the opera’s three acts takes place: the Church of Sant’Andrea della Valle, the Palazzo Farnese, and Castel Sant’Angelo. Far more controversial, however, was the closing scene of Act I, in which Bondy has the villain Scarpia lasciviously embracing a statue of the Virgin Mary.

The gesture was apparently omitted at the dress rehearsal attended by Catholic League President William Donohue, who reported that this “Tosca is not sacrilegious. It’s just a bore.” Yet a quick search on YouTube will retrieve a clip from opening night showing Scarpia kneeling in reverence before the statue of Our Lady, kissing her mantle, then ferociously thrusting his face into her bosom as the chorus of clerics and pious faithful onstage turn away in horror. Numerous people involved in the production made it clear that this was a compromise of restraint upon Bondy’s original idea of having Scarpia molest the statue — or worse.

Sacrilegious? At least that was the (dramatic) intent. A bore? Anything but.

After the demise of Soviet tyranny, the economic, cultural, and military course of the world is guided by an inner elite of neo-pagans.

Away With the Manger, a Sleigh for His Bed?

Christmas is in the air. Merry merchants deck the halls of commerce. Children are singing…

Hungary: The Envy of Nations... A Small First Step... Ecclesial Weather Forecast... Changing Structures... Marginalized Pathologies... The Architectonic Paradigm for Thought & Action... The Limits of Satire... Not a Nutjob... From Criminalization to Medicalization... Praying With Prisoners