Volume > Issue > Too Late Have I Loved You 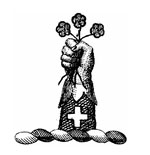 Too Late Have I Loved You

By John Ballentine | September 2012
John Ballentine, who has been incarcerated at Greens­ville Correctional Center in Jarratt, Virginia, since his conviction in 1989, converted to Catholicism in 2001. He is presently pursuing a master's degree in theology from Catholic Distance University. He invites readers to visit his blog, www.thunderinthecell.blog.com, where a "coda" to this story, as well as his other writings, can be found.

When St. Augustine wrote in his Confessions about discovering God by examining his conscience, he opened his soul to every generation after him. I took his name at confirmation, and I walk in his footsteps as I examine my conscience, pondering how I had my own preborn children murdered, and remembering how I found God. Augustine made famous the phrase, “Too late have I loved You.” Too late have I loved you, my children, too late to save you from my selfishness.

I was selfish in that I didn’t want to share the gift of life with anyone else, as if sharing would somehow diminish my own life. My college girlfriend was on the Pill. When she became pregnant, I felt trapped. It’s difficult to acknowledge, but I felt threatened by the most defenseless of all human beings.

I don’t need to tell you about the heady days of college life when young men don’t want to bridle their lust. My college girlfriend, I suppose, was open to life and love, but I never asked her what she wanted. I didn’t care. I decided immediately that we had to resort to murder as the back-up, fail-safe method of birth control.

To borrow the lingo of detective films, the crime scene was her womb and the wrongful death of the living person there was called an “abortion.” This crime scene would have no investigators except for the consciences of the co-conspirators and their accomplices. The so-called health provider provided no health at all. Three hearts were beating when my girlfriend and I entered the abortuary. Only two survived the visit. And those two hearts were now badly disfigured.

Not in the Limelight

Jim Holman is a Catholic who knows his money and talents are only a loan, and that he will have to account for them on Judgment Day.

Scrooge stated, “Let those poor go to the prisons and the Union workhouses. And if they’d rather die, they had better do it."