Volume > Issue > To Visit the Sick 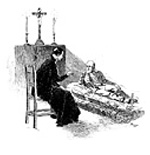 To Visit the Sick

By Donald D. Hook | January-February 2011
Donald D. Hook, Ph.D., of Georgetown, Delaware, is Professor Emeritus of Modern Languages and Linguistics at Trinity College, Hartford, and is the author of dozens of books and over a hundred articles on various subjects.

“If we were members of a Protestant church, this wouldn’t happen,” claimed my wife. She was referring to our parish clergy’s failure to minister to us during a serious and prolonged illness. Her statement was based on her familiarity with her minister father’s assiduous visitation practices and our later decades of membership as a married couple in the Episcopal Church. “You might be right,” I replied, “but I am not so sure.”

The question of a priest’s obligation to inquire into the health of his parishioners arose recently when my wife underwent her second breast surgery — her third bout with cancer — and then embarked on a twelve-week course of chemotherapy, to be followed by a seven-week regimen of radiation, and five years of Arimidex pills. I was intimately involved in all of her treatments and, because our children and grandchildren live at a considerable distance from us, have had charge of all household functions for a long time.

My wife and I have never regretted our reception into the Catholic Church nearly two decades ago. We only regret not taking the step sooner. In the ten years of our membership in our present parish church we have been well known to our clergy, especially to our present pastor, his parochial vicar, and his three deacons. We had not missed a single Mass or holy day or Stations of the Cross in all those years, a practice continued from our previous membership in a Catholic church near where we used to live. I suspect we have also been among the more generous contributors. We have admittedly not served in other ways at this church — a function of increasing age; my wife is in her seventies, I in my eighties — as was our wont in bygone years.

Due to my wife’s condition, we were unable to attend Mass from Lent until Trinity Sunday. She could not walk unassisted or stand for long, and I could not leave her alone because of her tendency to fall while on medication. During this entire period we received not a single telephone call, e-mail, or note from our clergy, let alone a visit or Holy Communion — in short, no curiosity about our extended absence. Yet a basic assumption, in the case of old people, should be that they are missing from church due to illness or worse, not to any act of petulancy. We paid our Sunday offering by mail and twice enclosed a note explaining our absence, but there was never a response, not even from the parish secretary, who could have reported it to the pastor or to a visiting committee.

Bishops in Germany have taken an embarrassingly long time to learn that: "We cannot earn money during the week with what we preach against on Sundays."