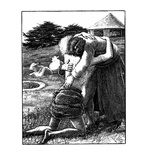 Fathers and Sons. By Ivan Turgenev.

Honour thy father and thy mother, that thou mayest be long-lived upon the land which the Lord thy God will give thee.— Exodus 20:12

We are living in an age in which virtually all authority is held in contempt. While the revolt against authority is ingrained in our human nature — it can be traced to our first parents’ disobedience of God’s one law in the Garden of Eden — we now seem to be in uncharted human territory of disobedience. Entire societies honor disrespect of authority as a social good. Such an ethos could only be possible during the twilight of a collapsing civilization: Before the institutions of social order finally crumble, the voices of cynics and scoffers rise up in unison to mock what made those societies possible.

The assault on authority has been institutionalized, which creates certain ironies considering that those lending moral support to the destruction of the dwindling edifices of civilization are often the very same people in charge of those institutions. Think of the feckless college presidents, especially the Catholic ones, who have long since abdicated the search for truth as an organizing principle of the university; or politicians and judges who warp notions of right and wrong to sanction the undermining of marriage, the family, and life itself; or churchmen who actively seek to destroy the divine institution to which they vowed service and love.

The “auto-demolition” of which Pope Paul VI spoke in 1972 was certainly not limited to Holy Mother Church. Other institutions — ones without divine protection — are crumbling at such a speed that one can only wonder at what might have triggered the decline. Perhaps we could point to 1917 and the beginning of international communism as an assault on religion and property. Or to 1789 when the French Revolution provided perhaps the first modernist pogrom. Or to 1517 when famous heresiarch Mar­tin Lu­ther launched a campaign against Holy Mother Church that further rent the garment of Christendom. One could debate which date in the history of the West marks the genesis of the social exaltation of disobeying legit­imate authority, but the fact remains that it has occurred and, since its occurrence, it has degenerated exponentially.

The question of authority, among other things, is the subject of Ivan Turgenev’s novel Fathers and Sons. The particular authority at issue is, as one might surmise, that of parents. Written in 1862 by a professed westernizing Russian liberal, this novel succinctly addresses (and per­haps glorifies) the social ascendancy of sons writ large at the expense of their fathers. Through Turgenev, we see quite clearly the coming insolence of youth juxtaposed with the sheer cowardice of the older generation that failed them.