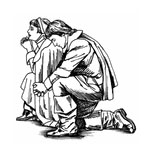 The Way of St. James

COSMIC POWER OR THE CHRIST?

By Joseph Cornwall | September 2015
Joseph Cornwall and his wife, Denise, raised their family in Providence, Rhode Island, where he practices architecture and she paints. They have four children and a grandchild.

“Continue therefore to live in Christ Jesus the Lord, in the spirit in which you received Him; be rooted in Him and built up in Him, as you have been taught, and overflowing with gratitude. See to it that no one deceives you through any empty, seductive philosophy; a philosophy based on cosmic powers rather than on Christ. In Christ the fullness of deity resides in bodily form; in Him who is the head of every principality and power.” — Colossians 2:6-10

These words from St. Paul’s Letter to the Colossians, copied on an index card, were one of many clippings and notes that covered the narrow walls of our bathroom behind the kitchen during the years the kids were growing up. While walking the Camino de Santiago (“the Way of St. James”) from St. Jean Pied du Port, France, to Santiago de Compostela, Spain, in the autumn of 2011, these words of St. Paul came back to me again and again. An enduring wonder of the pilgrimage was the vast number of pilgrims innocent of any warning St. Paul might have been addressing.

Certainly the Colossians received a spirit in great inebriating quaffs that for many today is thin and weak. Likely for those walking the Camino today, they are stirred more by Shirley MacLaine’s account (The Camino: A Journey of the Spirit, 2001) or that of German humorist Hape Kerkeling (I’m Off Then: Losing and Finding Myself on the Camino de Santiago, 2009). Empty, seductive philosophies are everywhere.

The destination of this pilgrimage is the tomb of St. James the Elder, his remains returned to Compostela by his followers. Tradition has it that he converted this pagan corner of the Iberian Peninsula, which the Romans couldn’t subdue. Known throughout the ancient world as Finnis Terrae (“the End of the Earth”) for its location just at the edge of the known world, it was wet, forested hill country. James spent time here shortly after Christ’s Ascension and the founding of the Church in Jerusalem. Within nine years, James was back in Jerusalem, the first martyr of the Apostles, beheaded by Herod Agrippa.

Pilgrims today are hikers and bikers (many are on bicycles) enjoying a respite from work with mile after mile of gorgeous countryside. Only occasionally are the four hundred and ninety miles from Pied du Port to Santiago interrupted by the narrow vastness of highway traffic and the impersonal scale of modern motorized life. With E.U. Heritage funding, the rough spots have been made smooth, and accommodations await the pilgrim every hour or two. It is much less expensive than other European holidays.

Pew-sitters and religious leaders have come up with their own formulas to lessen the pain of guilt, all of them at odds with Scripture.

She was a great Bible-quoter, a practice that seemed at once to console her and to show off her spiritual achievement.