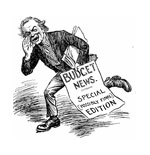 In wake of the devastating cyclone that left 140,000 dead and 2.4 million in desperate need of food and shelter, the United Nations Population Fund (UNFPA) sent 220,000 condoms to Myanmar “to help needy survivors with no access to contraceptives” (Agence France-Presse, May 20). “We don’t want regular use of contraception disrupted,” explained UNFPA aid advisor Chaiyos Kunanusont. “An emergency usually damages the health system, so people don’t have access to condoms.” UN flights were also carrying “reproductive health kits,” added Kunanusont, which included enough contraceptive pills and injections to last 3,390 women three months.

Self-proclaimed Catholic “Bishop” Alan Bushey and “Sister” Mary Burnadette [sic] kept the body of a 90-year-old woman sitting on the toilet for two months, claiming God would bring her back to life. The district attorney in Juneau County, Wisconsin, called the couple a cult. They’re accused of using religion to commit fraud by cashing the dead woman’s social-security checks. Archbishop Timothy Dolan of Milwaukee commented, “That’s not even religion. That’s a terrible distortion and corruption of religion to even call that part of the patrimony and tradition of the Church. Periodically throughout the Church you’ll get these crackpots who claim to be bishops or claim to be priests or even claim to be part of the Church, and they’re not, of course” (WTMJ News, May 12).

A Swedish woman is celebrating her 29th anniversary of being married to the Berlin Wall. Eija-Riitta Berliner-Mauer, 54, whose surname means “Berlin Wall” in German, wed the concrete structure in 1979, reported London’s Daily Telegraph (May 27). Berliner-Mauer claimed she fell in love with the wall when she first saw it on TV as a child. She began collecting “his” pictures and saving up for visits. On her sixth trip in 1979 they tied the knot before a handful of guests. According to Berliner-Mauer, “The Great Wall of China is attractive, but he’s too thick — my husband is sexier.” While the rest of mankind rejoiced when the Berlin Wall was largely torn down in 1989, its “wife” was horrified: “What they did was awful. They mutilated my husband.”

The Vatican’s chief astronomer says there is no conflict between believing in God and in the possibility of “extraterrestrial brothers” perhaps more evolved than man. “In my opinion this possibility [of life on other planets] exists,” said Fr. Jose Gabriel Funes, a 45-year-old Jesuit priest who is head of the Vatican Observatory and a scientific adviser to Pope Benedict XVI. In a May 13 interview in L’Osservatore Romano, the Vatican’s official newspaper, Fr. Funes asked, “Why can’t we speak of a ‘brother extraterrestrial’? It would still be part of creation.” Fr. Funes held out the possibility that the human race might actually be the “lost sheep” of the universe. “There could be (other beings) who remained in full friendship with their creator,” he said.