Volume > Issue > The Virtue of Reverence & Respect for Life 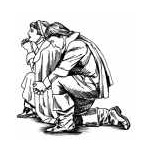 The Virtue of Reverence & Respect for Life

SEEING WITH A PURE HEART

By Stephen Napier | October 2010
Dr. Stephen Napier is an ethicist with the National Catholic Bioethics Center and a member of the University of Pennsylvania's Institutional Review Board. His research activities include work on the following issues: abortion, embryonic stem-cell research, organ donation, clinical ethics, research ethics, and transhumanism/anti-senescence research.

Several years ago I lived in a traditional Orthodox monastery, where liturgies were typically celebrated at midnight. One liturgy stands out in my mind: On this particular night we venerated several relics of saints housed in the monastery. This was the first time I had experienced the veneration of saints during the liturgy and I immediately felt out of place. The fathers and brothers engaged in a series of twists and turns, prostrations and genuflections that made it hard for me even to concentrate. After each of the fathers and brothers had venerated the relics, it was the guests’ turn. I quietly admitted my trepidation to another long-term guest. He replied, “Just do what I do.” He stood before the iconostasis and did his twists, turns, bows, prostrations, and genuflections, culminating in a single kiss of the relics. Now it was my turn — and I was the last in line! There is no great climax to this story, no interesting plot development, and no happy ending. One word describes my performance: hamartia. I missed the mark, and fatuously so. The guest reprimanded me discreetly. As the liturgy rolled on (in a foreign language), I found myself reflecting on what had just happened. I rewound the tape in my mind and replayed it again and again.

Each monk had done the same thing, and all acted in unison. Monks would go to the iconostasis in pairs and perform their twists, turns, prostrations, and genuflections in the exact same tempo and manner. Janet Jackson could not have choreographed a better group performance. But it was not the unison and precision that really caught my attention. When I replayed the episode in slow motion, I noticed something even more striking: These monks were worshiping God with their entire person, in a unity of body and soul. It dawned on me that what I had just witnessed was each worshiper crying out to God with his entire being, “Lord Jesus Christ, Son of God, have mercy upon me, a sinner.” It became evident to me that we were worshiping God entirely, holistically, in a way that allowed participants to see beyond the outer form and into the souls of the worshipers.

Reverence is one of those virtues that integrates our beings. It enables the body to “speak” more proficiently what the soul believes. There are other virtues that integrate us, such as charity, temperance, and courage. With temperance and courage, the integration concerns ourselves — namely, the alignment of our passions with reason. Charity, meanwhile, integrates us into the common good — it assists us in conforming our lives to the pursuit of the good of the other. Charity also integrates us by uniting us to others for our own good. But reverence is different. Reverence integrates us by uniting us to the thing revered — in the case of the monks, the thing revered is God. Reverence reaches out to God, crying, “Lord Jesus Christ, have mercy upon me, a sinner.” In asking for mercy, there is no hubris, only humility. In asking for mercy, there is an essential desire to unite with God. In reverence, humility and charity are united into one virtue.

Reverence begins with an act of recognition. We recognize the divine as divine, as transcendent, as perfect, as the alpha and omega of existence, and as the concurrent cause of all that is. Reverence also involves a recognition of oneself — where one stands morally and spiritually in relation to the divine. The act of recognition is a function of one’s will, passions, desires, and attitudes; the mediator of these different internal forces is the heart. In short, we have to be pure in heart to see (with our intellect or nous) the object being revered.

The Lord God, eschewing the “pastoral prudence” of hesitant confessors, asked the Original Penitents point blank to tell what they had done.