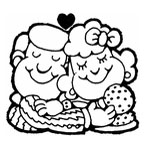 IN LIGHT OF CREATION, FALL & REDEMPTION

By Marshall Fightlin | January-February 1984
Marshall Fightlin is Associate Director of Catholic Family Services for the Diocese of Norwich (Conn.). He is also in private practice as a marriage and family therapist.

It is almost a cliché to say that there is a lot of confusion today about the meaning of sexuality. Turn on your television set either at prime time or during the day, and you find programs glorifying every form of sexuality except marital sexuality. Homosexuality, premarital sex, infidelity, divorce, etc., are all held up as “alternative lifestyles.”

There is a triple theme in Catholic theology that applies to the whole human situation. It ap­plies to man, marriage, and sexuality in marriage. This triple theme is Creation, Fall, and Redemp­tion. The Creation theme tells us that everything in the universe is good and to be affirmed because God made it. The theme of the Fall tells us that creation has a major flaw running through it: sin. Fallen creation calls for the theme of Redemption, which tells us that Christ offers redemption to the universe and everything in it, including man, mar­riage, and conjugal intimacy. This article will look at man and marriage in light of the triple theme of Creation-Fall-Redemption, and thus arrive at a Ro­man Catholic understanding of marital intimacy.

Scripture presents man as created in the image of God. Because man is a reflection of God, we need to ask ourselves who God is. Revelation pre­sents God to us as self-giving Love. God created us freely, and, in the act of creating us, gave himself to us. His act of creating us is self-giving. It is char­acterized by freedom and generosity. Although we certainly rejoice his heart, God did not create us primarily so that he could get something from us. He created us primarily to give us of his own full­ness. The act of creation is an act of complete un­selfishness. God is self-giving Love who seeks what is good for those he loves.