Volume > Issue > The Shadow Over All Politics 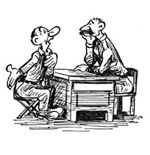 The Shadow Over All Politics

FRIENDSHIP & THE FULLNESS OF REALITY

By James V. Schall | January-February 2017
Fr. James V. Schall, S.J., is Professor Emeritus in the Department of Government at Georgetown University. Among his many books are The Order of Things, On the Unseriousness of Human Affairs, The Modern Age, and The Mind That Is Catholic. His most recent book is A Line Through the Human Heart: On Sinning & Being Forgiven (Angelico Press, 2016). His last lecture at Georgetown, "A Final Gladness," can be viewed on YouTube.

“The Athenian Stranger [in Plato’s Laws] seems to think that adults retain (or at least should retain) the same wonder toward fellow human beings that children have for wonders. In fact, an authentic beholding of other human beings necessitates such wonder. As a child knows that a puppet is inanimate, yet lets herself believe it is animate for the sake of participating in the greater story, so too does an adult know that another human being is mortal, yet divines that human beings have a connection to immortality.” — John von Heyking, The Form of Politics: Aristotle and Plato on Friendship

Anyone who has taught college students, especially if this teaching included Plato and Aristotle, can be certain of one thing: The single most riveting and perplexing issue that personally concerns students of early adulthood is not justice or pleasure but friendship. This topic is, as Aristotle intimated, a most unsettling question about a god who is only a “First Mover.” When sorted out, friendship is ultimately grounded in the Trinity, in the fact that God is not lonely or in need of something besides this inner Trinitarian life. Though our culture is almost totally politicized in all areas, much to its own self-inflicted harm, friendship is the one issue that gives almost everyone pause. The lack of or betrayal of friends is what loneliness and sin are about. Friendship implies more than most of what our philosophies allow us to consider about the fullness of reality. It is the one sure path out of ourselves to the rightness of the human order of virtue, and it is the completion of our conversations with others about the truth of things.

Aristotle himself told the legislators of Greece that the lawmaker is more concerned with friendship than justice. This insight is ever an astonishing yet intuitively true affirmation. Modern polity is suffused with slogans such as diversity, rights, feelings, and social justice that impede us from understanding why friendship exists in the first place. A reconsideration of the relation of friendship and politics is most welcome. And this is what John von Heyking has given us — a moving, learned, yet experiential explication of friendship. The primary interest of his book The Form of Politics: Aristotle and Plato on Friendship (McGill-Queens University Press, 2016) is political friendship, or what Aquinas called concord. It consists in an explicit or tacit agreement among men to live together peacefully in a given polity, according to its laws and customs, which can themselves be seen to conform to the norms of truth, of reason.

Nonetheless, von Heyking recognizes that without an understanding of virtue and mutually willed friendship, political friendship will not be likely. He has no problem with Aristotle’s distinguishing between friendships based on utility, friendships based on pleasure, and the highest sort, friendships based on truth. All types of friendship are good and play significant roles in our lives. Without them, we would only know the “just” life, which does not look to the other person as other but to what is rightly owed to another. Pure justice is a dangerous and harsh virtue if it is not mitigated by friendships of various sorts. Yet justice is a necessity amid large groups of interrelated and potentially interrelated people who are not necessarily of the same polity. It makes possible economics, the production and distribution of goods. But justice is not directly interested in the other person’s irreducible uniqueness. It does not deny this uniqueness, but its purpose is limited to the objective “rightness” in exchanges and controversies.

Not a few of our contemporaries consider life in this world and its preservation at any cost to be the highest human good. Death, especially violent death, is, as Hobbes said, the greatest evil, beyond which no hope or judgment is found. In both the classical and Christian traditions, however, the greatest love is shown by laying down one’s life for one’s friends, an act necessarily rooted in hope. We cannot sacrifice our life if we insist that this world is all there is. The most heartrending act we witness in our lives, as Belloc wrote in The Four Men, is the breaking of human companionship. A marriage that ends in divorce is, in its essence, the collapse of the most intimate form of true friendship that mankind knows. Its consequences remain one of the often unacknowledged scourges of our culture — and not just for the children but for the individuals immediately involved. In reading von Heyking’s remarkably insightful book, one has the impression that it is written by a happily married man. But friendship does not come about, nor is it preserved or broken, solely by chance, even if an element of chance is always found in it.

Letter to the Editor: April 1988
What It Means to Be A "Better Person"

Modern evangelism certainly has its trivial and self-serving elements. From the fictional Elmer Gantry to…