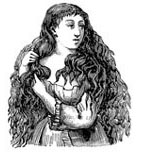 The Prayers of Moloch’s Modern Priestesses

Peter Kreeft, a man of seemingly interminable wit and wisdom, wrote back in 2002 that “abortion is the sacrament of the sexual revolution.”

It was a great one-liner, from a man who’s written a great many of them; one that captured, in an economy of words, the fanaticism typical of many abortion advocates. From the pro-life perspective, it was a direct score; but from the pro-abortion angle, it must have seemed way off the mark. One could easily imagine the bemused reactions of the lusty ladies of the sexual revolution who, with narrowed glares and hands a-hip, might retort, “What need have we of sacraments or religion?”

But there was, even before Kreeft wrote this, a fringe group of feminists for whom his metaphor was more than mere fancy, a group for whom legalized abortion signaled something greater than a political victory or social progress. Exactly ten years earlier, a book had been published bearing the very title The Sacrament of Abortion. Precisely ten years before that, a book had been published bearing the title Abortion Is a Blessing.

Closer to Kreeft in chronology was Patricia Baird-Windle who, upon retiring in 1999 after having performed over 65,000 abortions, channeled both books when she told the Florida Today newspaper, “I now consider abortion to be a major blessing, and to be a sacrament in the hands of women” (Aug. 29, 1999). Also contemporaneous to Kreeft was Daniel Maguire, a former Catholic priest and a professor of moral theology at Marquette, who authored Sacred Choices (2001), a book in which he argues that abortion can be “a holy choice, a sacred choice,” and that its prohibition amounts to “religious persecution.”

Joan Andrews grew up on a farm near Nash­ville. While still a pre-teen, she developed…

Consumed by Zeal for the Culture of Death

A review of Good Catholics: The Battle over Abortion in the Catholic Church