Volume > Issue > The Pope & the Laborer 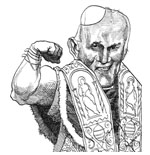 The Pope & the Laborer

By Kevin Bezner | May 2011
Kevin Bezner is a poet, teacher, and catechist who lives in Charlotte, North Carolina. He teaches English at Belmont Abbey College.

Some years ago, I found myself out of work. Since I could not find work in my field, I took a job working at night in a warehouse where I unpacked flowers in the refrigerator room from about 8 PM to 1 AM. The work was tedious, the room wet and cold, but no one bothered me and I enjoyed the steady, repetitive work we did in silence.

The Russian immigrant who was in charge of our two- to three-man team showed me how to open the cardboard boxes we unloaded and remove the long-stem roses, soon to fill vases for Valentine’s Day, without getting too many cuts from the thorns. Once we unloaded the roses, we stacked them on tables for the cutters.

At the end of the night, we broke down the numerous boxes we’d unloaded with efficient kicks and put them out in the trash. If we finished early, as we did some nights, we joined the assembly line and helped the women put the flowers we had unpacked into the vases. I found this work more difficult than the work in the refrigerator room — the vases came down the line very fast for my still cold and fumbling hands. But the women worked flawlessly even as they talked incessantly.

I would get home about 1:30 AM and would welcome the time alone, especially on the nights that had ended on the line. Before I would settle in to read and perhaps write poems for a few hours before going to bed, I would have a beer or a glass of wine and something to eat in front of the television in the kitchen. One morning, while looking for something to watch, I settled on EWTN, the Catholic station I usually passed by. I watched for about ten minutes, the way a curious tourist might stop to watch a street performance in a country vastly different from his own.

Don't let any pastor say no to celebrating Divine Mercy Sunday at every Mass that day, just like any other feast day.

A Hero of History Is Beatified

In the final analysis, can any of the objections voiced against his beatification stand up to the proof that God Himself intervened in the temporal world in response to the heavenly intercession of Pope John Paul II?

The Shot Heard 'Round the World

When, on March 19, 1996, Bishop Fabian Bruskewitz of Lincoln, Nebraska, announced that Catholics in…