Volume > Issue > The Old Days: Were They Really That Good? 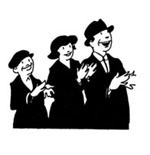 The Old Days: Were They Really That Good?

ON "BEING CATHOLIC" IN TWO DIFFERENT DISPENSATIONS

By John Lyon | January-February 2018
John Lyon has held teaching and administrative positions at several universities, including Notre Dame, Ball State, Kentucky State, and St. Mary's (Minnesota). More recently, he taught literature and history at a classical academy in Wisconsin. He has also farmed, raising berries, flowers, vegetables, and apples, and operated a stall at the local farmer's market in Bayfield County, Wisconsin.

It is common among Catholics of a certain age or a traditional bent to consider the period just before the Second Vatican Council as a golden age of U.S. Catholicism, especially in education. I graduated from a Catholic university before the Council. Yet I have little idea just how many of my fellow students kept the faith after graduation, and of those who did, what keeping and the faith meant to them. Nevertheless, the issue concerning the “good old days” in the Church before Vatican II is an important one, and the reflections that follow, though not cluttered with statistics, mathematical formulae, or sociological hypotheses, may yet have some relevance, unless the gates of the minds of our contemporaries are closed against all remembrance of things past that do not resonate with such parameters.

To some extent, those of us who came of age in the 1940s see the “good old days” of our youth as good because we were young then, survived, and can contemplate them from a relatively safe distance. The perils of our youth threaten us not, or are transmuted into lesser crises. What amendment can be made to our past delinquencies we have long attempted, but we also know that time has only one direction. Though we ask where the snows of yesteryear have gone, and our sins are ever before us, the snows and the sins shadow but do not determine us. We were young and Catholic, and we have survived, some number of us at least, to be not young and yet Catholic. But in what respects does being Catholic mean the same thing in the two disparate temporal dispensations?

Being young in the old dispensation meant that, like all other generations of mankind, we were born into a condition the Germans endearingly call the Urdummheit (primeval stupidity). But we were born into a tradition — one that was at once genetic, familial, social, and religious. The things being handed down to us varied from transmissible organic molecules through family structure and patterns of social interaction to ways of knowing matters of ontology, cosmology, epistemology, and theology. These ways were initially quite unsophisticated. A mother’s touch and a father’s glance assured us of the goodness of it all. We were generally born into intact families, which were, with equal generality, neither nuclear nor affluent.

Like the young of every generation, we were ignorant, unsophisticated, inarticulate, and innocent. We tended not to cause evil. Mostly. These characteristics are not virtues but can be the preconditions of such. And in our case, parental tuition consisted largely in helping us realize that we were not little cosmic atoms drifting aimlessly about a dimensionless universe. The world was not some vast solipsism. We were not our own; we belonged to a tradition replete with traditional virtues, which attempted to ensure we were educable.

State licensing and certification lend legitimacy to “experts” but, as the Teacher from Nazareth remarked, by their fruits ye shall know them.

Where Have All the Students Gone?

Media coverage of Catholic school closings in city after city raises a certain question that isn't asked, and that few can even imagine asking.