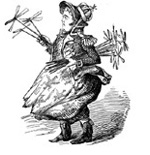 The Obedient Toddler & the Rebellious Teen

ON THE FORMS OF MORAL IMMATURITY

By Rob Agnelli | January-February 2013
Rob Agnelli, who holds an M.A. in moral theology from Holy Apostles College and Seminary in Cromwell, Connecticut, lives in Raleigh, North Carolina, with his wife, Allison, and their three sons. He teaches bioethics throughout the Diocese of Raleigh, and is part of a national speakers' panel in which he addresses issues related to marriage, fatherhood, and moral theology. His articles have appeared in numerous publications, including Homiletic & Pastoral Review, the National Catholic Bioethics Center's Ethics & Medics, and First Things's "On the Square."

As the cultural tides of secularism batter the foundations of the Church, more and more American Catholics are exercising the “right to dissent” from Church teaching on a number of issues. This supposed right is typically invoked in the name of “primacy of conscience.” A recent example appeared in an op-ed piece in the Raleigh News & Observer (May 21, 2012) after the bishops of North Carolina played a pivotal role in the adoption of an amendment to the state constitution defining marriage as between a man and a woman. Author Lenore Yarger wrote:

One of the best kept secrets in the Catholic Church is that, like the general public, we Catholics can choose whether to follow our leadership on these issues. The church’s own teaching, bound in the Catechism, states that we are “obliged to follow faithfully what [we] know to be just and right…. A human being must always obey the certain judgment of his [or her] conscience.” Vatican II, the U.S. bishops, and Pope John Paul II, among others, have echoed this “primacy of conscience.”

Although Yarger quotes paragraph 1800 from the Catechism, she would be hard-pressed to find a single magisterial document in which the term “primacy of conscience” is used. The Church avoids such language because it introduces great ambiguity into the understanding of conscience. Not surprisingly, once the thinking on conscience, which the Second Vatican Council called “the most secret core and sanctuary of a man” (Gaudium et Spes, no. 16), becomes muddled, moral chaos quickly ensues.

Conscience is often spoken of as a thing, a faculty of the human person like the will or the imagination. Conscience is not, however, a thing but an act of the intellect — or, more specifically, a judgment. A judgment is an attempt by man through reason to conform his subjective knowledge to objective reality. Whenever man is confronted with a particular question about reality, the answer he gives is a judgment of his reason. Conscience is a judgment of reason like many others, but it differs in that it is a practical moral judgment of what one ought to do in a specific situation. This is succinctly summarized in the Catechism, which defines conscience as “a judgment of reason whereby the human person recognizes the moral quality of a concrete act that he is going to perform, is in the process of performing, or has already completed” (no. 1777).

If conscience is not a thing, then it is clearly not to be understood as something external to man, like the proverbial angel on one’s shoulder. This popular yet childish notion does not adequately explain conscience, and a great many Catholics labor under a false conception of conscience born of two distinct kinds of moral immaturity. On the one hand are the “rebellious teenagers” who must assert their freedom by embracing “the primacy of conscience”; on the other are the “obedient toddlers” who must submit to authority and be told what to do all the time. Despite the apparent opposition of these two approaches, they both make the same fundamental error: Both assume that there is an insurmountable chasm between freedom and authority. One rejects freedom in favor of authority while the other rejects authority in favor of freedom.

Does the hierarchy understand how much victims suffer? Could they even imagine what it must be like to have a child subjected to clerical abuse?

Most Americans assume some people in power must be the good guys, people who can do something to fix things.