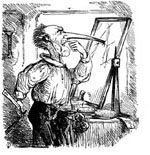 Words to Die By

An evangelical pastor died of COVID-19 just weeks after proudly showing off how packed his Virginia church was — and vowing to keep preaching “unless I’m in jail or the hospital” (New York Post, April 13). At his last known in-person service at Richmond’s New Deliverance Evangelistic Church on March 22, Bishop Gerald O. Glenn said, “I firmly believe that God is larger than this dreaded virus. You can quote me on that.” He repeated it a second time to applause from the large crowd, saying that “people are healed” in his church. Glenn then defiantly announced that his church was “in violation” of safety protocols, with “way more than 10 people” present. And he insisted on keeping his church open. “I am essential!” he exclaimed. “I’m a preacher — I talk to God!” On April 12, Glenn’s church announced “with an exceedingly sorrowful and heavy heart” that he had died a week after being diagnosed with COVID-19.

Amid growing concerns over coronavirus infection, authorities in the Czech Republic told a group of nudists that they need to cover up — but not in the way you’d expect. Police in Lázně Bohdaneč, a popular spa town east of Prague, targeted nude sunbathers for neglecting to cover their mouths. “Unfortunately, the sunbathing citizens were in one place in larger numbers and some did not even have a mask,” said police spokeswoman Markéta Janovská. A nationwide emergency ordinance stipulated that while exhibitionists are allowed to bask in the nude in areas designated for that purpose, they must do so while wearing facemasks and not in groups of more than two people. “We understand that many people do not have a garden and want to ventilate in the countryside,” Janovská said. “But we all want one thing in common: fully respecting government regulations.” Police said no fines were issued, and the sunbathers immediately put on facemasks (New York Post, April 7).

Ignore It & Maybe It Will Go Away

Turkmenistan has banned the media from using the word coronavirus and threatened harsh punishments for those caught talking about the global pandemic (Fox News, April 1). The ex-Soviet nation even made sure the word was removed from health information brochures distributed in schools, hospitals, and workplaces. Authorities in the oil-rich Central Asian nation have also forbidden people to wear facemasks under the threat of jail time, and plainclothes policemen reportedly listen to people’s conversations in queues, at bus stops, and on buses. “By adopting this extreme method for eradicating all information about the coronavirus,” Turkmen authorities have “endangered” citizens, said Jeanne Cavelier of Reporters Without Borders, a France-based media-freedom watchdog group. Cavelier added that the denial of information reinforces the strong arm of President Gurbanguly Berdymukhammedov, who has ruled the country since 2006 and considers himself Turkmenistan’s arkadaq, or protector. Before banning talk of COVID-19, Berdymukhammedov promoted a book he wrote on herbal remedies that, he said, could be useful in combating the virus. Turkmenistan has so far reported no cases of coronavirus.

Passion for Yoga... Christian Un-conventions... The Anglican Open Table... Booty Recall... Dressing Up for School... How to Become a True Socialist... and more ... and more