Volume > Issue > The News You May Have Missed: January-February 2023 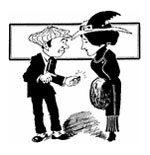 The News You May Have Missed: January-February 2023

From Nun to None

An Italian nun who became an international singing sensation has left the religious life. Cristina Scuccia, formerly of the Ursuline Sisters of the Holy Family in Milan, won Italy’s version of The Voice in 2014 with her performance of “What a Feeling,” the theme song from the movie Flashdance. She later released an album that included a cover of Madonna’s “Like a Virgin.” Eight years on, Scuccia, 34, has abandoned her religious vocation. Dressed in high heels and a red suit, with a pierced nose and long dark hair flowing freely, she announced her decision on the talk show Verissimo. “Change is a sign of evolution,” she said, “but it is always scary because it is easier to anchor oneself to one’s certainties rather than questioning oneself. Is there a right or wrong?” Scuccia is pursuing a music career while working as a waitress in Spain. “I chose to follow my heart without thinking about what people would say about me,” she added. “I took a leap of faith and was worried about ending up under a bridge. I always repeated this to my psychologist” (The Guardian, Nov. 21).

The European Court of Human Rights ruled that a topless feminist who acted out the aborting of Jesus in a Paris church in 2013 was exercising “freedom of expression” (The Christian Post, Oct. 24). Bare-breasted and covered in pro-abortion slogans, Éloïse Bouton entered L’église de la Madeleine wearing a blue veil to mock the Virgin Mary and carrying pieces of animal liver. She stood in front of the altar, simulated aborting Jesus in protest of the Catholic Church’s teaching against abortion, and then urinated on the floor. A national court found Bouton guilty of “sexual display,” ordered her to pay the parish €2,000, and sentenced her to one month in prison. The Court of Cassation, the highest judicial court in France, upheld the judgment. But the ECHR argued that the decision violated the European Convention on Human Rights. “Far from being gratuitously offensive or seeking to disturb those present in the church in the practice of their worship,” it wrote, “her action was part of a public debate on the place of women in society.” The ECHR ordered France to pay Bouton €9,800 for “moral damages” and legal costs.

To the alarm and dismay of local parents, a California elementary school agreed to host an “After School Satan Club” in its cafeteria (Sacramento Bee, Nov. 21). Golden Hills Elementary School in Tehachapi, about 120 miles north of Los Angeles, approved the club, which is sponsored by Reason Alliance and the Satanic Temple. “By law, the District cannot discriminate among groups wishing to use [school] facilities,” said Tehachapi Unified School District Superintendent Stacey Larson-Everson. Golden Hills also hosts a Christian club on campus. In 2001 the U.S. Supreme Court ruled in Good News Club v. Milford Central School that a school may not discriminate against religious speech. “I’m not teaching these kids to be Satanic,” said Paul Hicks, the leader of the Golden Hills After School Satan Club. “I’m not teaching these kids that they need to hail Satan or identify as Satanists. What we’re doing is we’re teaching critical thinking, we’re teaching science, we’re teaching empathy and benevolence.”

In Honor of Our Priests... A Jewish Propaganda Rag?... Targeting the Rich... Personhood Already Possessed... Denying Communion... As the Shepherd, So the Flock... Trustworthy Scientists... Don't Use His Name... and more

A Graced Moment for the NEW OXFORD REVIEW

In February 1986, NOR held a gathering for subscribers, editors, board members, writers, and benefactors -- a once-in-a-lifetime event.