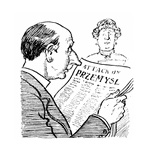 Meanwhile, on the other side of the country at Seattle University, also run by the Jesuits, the Office of Multicultural Affairs, in conjunction with the student Trans and Allies Club, sponsored “Transgender Awareness Week” as a special Lenten program. The cornucopia of offerings included a session on supposedly “transgender Bible heroes and heroines” and a “Criss-Cross Day,” which encouraged students to “come dressed for the day in your best gender-bending outfit” — guys in dresses and gals in boxers and suspenders. Not to go unnoticed: Seattle University is run by the Oregon Province of the Society of Jesus, the same Province filing for bankruptcy after paying out a $50 million settlement to more than 100 native Alaskans for cases of sexual abuse involving Jesuit priests.

Hindu priests married two frogs in Guwahati, northern India, in a ritual to please rain gods this spring. More than 2,000 wedding guests attended the ceremony as frog bride Bijuli, which means “Thunder,” and groom Barun, “Wind,” tied the knot. The amphibians were then fed a special celebratory lunch of flies and mosquitoes. The “wedding” was held because the region is suffering problems with chronic drought. A spokesman for local authorities said, “The marriage went off very well” (Ananova, Mar. 17). Nevertheless, rain is still not in the forecast.

As 58-year-old churchgoing Oklahoma factory worker James Brewer lay in the hospital after suffering a stroke, he decided it was time to make an extraordinary confession. He summoned the local police to his bedside, where he allegedly told them he had shot a man dead 32 years earlier in Tennessee whom he believed was trying to seduce his wife. Brewer had jumped bail, and he and his wife have been living a quiet life in Oklahoma under assumed identities ever since. But in a bizarre twist, Brewer survived the stroke and now faces criminal charges. “He wanted to cleanse his soul, because he thought he was going to the great beyond,” said detective Tony Grasso. Instead, Brewer is now going to trial for murder, and if found guilty could face the death penalty (Daily Telegraph, Mar. 23).