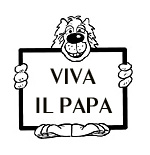 Piggybacking on the controversy over the Pope’s comments about condom use (about which see our New Oxford Note “Condom-mania, the Rerun” in this issue), People for the Ethical Treatment of Animals (PETA) doctored up an image of the Holy Father for its latest advertising campaign to promote spaying or neutering pets to control animal populations. In PETA’s latest leaflet, Benedict XVI appears to be tossing a condom into a crowd, accompanied by the caption, “Dogs and Cats Can’t Use Condoms.” A December press release by PETA announced that it will now be taking its “religion-inspired” agenda to the cathedrals and churches of the U.S. (USA Today, Dec. 4).

Atheists are livid again at the thought that some Christians still celebrate Christmas as a holy day that recognizes the birth of Jesus Christ. A billboard displayed near the New Jersey entrance to the Lincoln Tunnel during December showed a silhouetted manger scene with the message, “You KNOW it’s a Myth. This Season, Celebrate REASON.” The $20,000 campaign was sponsored by a national organization called American Atheists, which timed the promotion to preempt annual accusations that liberal groups are waging a war on Christmas by asking Christians to question their holiday traditions. “If the religious right wants a war on Christmas, this is what they’re going to get,” said American Atheists President David Silverman. “If they want a war on Christmas, we’re going to make sure they know what one looks like” (The Hack­en­sack Record, Dec. 3). Responding to the Grinch-style stunt, the Catholic League for Religious & Civil Rights took out a “counter­punch” billboard ad. At the Manhattan-side entrance to the tunnel, drivers read, “You know it’s real. This season celebrate Jesus.”

An anonymous gift-giver could face littering charges after he left Christmas presents for children in Pembrey Country Park near Lla­nelli, South Wales. The mystery man, who signed each gift from The Woodland Santa, stole into the park at night to hang gift-wrapped books and toys from fir trees. Carmar­then­shire council officials warned that the secret Santa could land in court because some of the presents were ruined by the weather and had to be thrown away as litter. “We would like to come to some kind of arrangement with him to better distribute his generosity — even if it is anonymously,” Councilor Clive Scour­field told London’s Daily Mirror (Dec. 7). In 2009 more than 600 toys and gifts were found hanging in the park in the run-up to Christ­mas. “He kept us busy up to Christmas Eve,” said park ranger Andrew Jenkins, “and there was only one sighting of him running away across the golf course.”

Neal Thompson has been dressing up like Jesus — with a white robe and cross necklace, and carrying a walking staff — and going to a new church every week for 22 years to, as he puts it, “represent my Lord and savior Jesus Christ.” He is usually questioned when he arrives and then welcomed. But when he tried to enter St. Paul’s Luth­er­an Church in Des Peres, Missouri, he was not allowed in. “One of the deacons saw me,” Thomp­­­son told Fox2Now.com (Nov. 2), “and when I went in the church, he met me and he said, ‘Can I help you? What do you want?’ I said, ‘I want to go to church here today.'” Thomp­son said the deacon wouldn’t allow him in the sanctuary and told him he’d have to sit in the hall­­way. “I said, ‘Well this ain’t right, you guys ain’t treating me right.’ He said, ‘We’re gonna call the police.’ I said, ‘Well call them, I don’t care. Call them.’ So I sat down and the next thing I know four or five police showed up.” Thompson left the church peacefully. “Oh I forgive them, I forgive them,” he said. Thompson claims this is only the second time in over two decades that he’s been kicked out of a church.