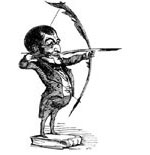 At an autumn harvest market in Leipzig, Germany, a visitor discovered a vendor selling coats and vests made of domestic cat fur (Spiegel Online, Oct. 5). “I thought it looked like cat fur, and the seller himself confirmed this, telling my wife he needed 18 to make a coat,” said Steffen Soult. A handmade reversible vest, which supposedly required eight cat pelts to make, was priced at over $600 and was described by the vendor as “cozy and warm.” Aware that the sale of both cat and dog fur violates German and EU animal-protection laws, Soult notified police and other city offices, which have since banned the vendor from selling his wares at any city-run market.

The Italian language gives the name bamboccionis, or “big babies,” to grown sons who live at home well into their thirties or later, a practice that has become so common as to be seen as a culture-wide phenomenon. A recent study showed that 48 percent of Italianos between the ages of 18 and 39 still live with their parents. Now, an exasperated Italian couple has resorted to legal help to kick their 41-year-old son out of the house (Daily Telegraph, Sept. 20). They say he has a perfectly good job and steady income but has resisted all attempts to persuade him to fly the nest. The parents have taken their case to an association that defends consumers’ legal rights. Lawyers gave the son ten days to find an apartment or have the case referred to court, with the prospect of forceful eviction.

Pakistan’s Telecommunications Authority recently established a measure that orders mobile-phone companies to block text messages that contain certain words considered vulgar, obscene, or harmful, especially those of a sexual nature. But Pakistani Christians are troubled because among the more than 1,600 banned words are “Jesus Christ” and “Satan,” reports Agenzia Fides (Nov. 21). Fr. John Shakir Nadeem, secretary of the Commission for Social Communications of the Pakistan Episcopal Conference, said, “We understand the desire to protect the minds of young people, indicating a list of obscene words. But why include the name of Christ? What is obscene?” Fr. Nadeem said that the ban not only “hurts the feelings of Christians,” but is a violation of Pakistan’s Constitution. The Telecommunications Authority justified its action by saying that the freedom of Pakistanis is “subject to the limitations provided by the law, in the interest of the glory of Islam.”

Japanese toilet maker Toto has developed the Neo, part motorized tricycle and part toilet, which runs on bio-gas produced from sewage. The three-wheeled motor-potty recently completed a promotional journey of more than 600 miles across Japan, reports Reuters (Nov. 11). The Neo features a toilet seat and has a giant roll of toilet paper mounted on the back. The bio-gas used as fuel is produced from a combination of household sewage and livestock waste that is broken down and fermented, said company spokesman Kenji Fujita. “Although the seat is indeed a toilet, it is not for actual use. The fuel is eco-friendly bio-gas, stored in the tanks on the back.” The toilet trike can run for almost 200 miles per fill-up and reach speeds of up to 45 mph. Ichie Tanaka, one of six people who rode the Neo across Japan to promote bio-fuels, said, “At first when I saw [it], I was taken aback. But after riding it, I found it quite interesting.” She called it “actually quite comfortable to sit on.”

The News You May Have Missed: November 2020