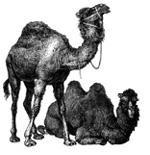 Johan Huibers, a 52-year-old Dutch millionaire, spent four years building a full-size replica of Noah’s Ark and has now opened its doors to the public (Orange News, Aug. 1). With dimensions as specified in the Book of Genesis, the 450-foot by 69-foot craft comes complete with life-size, but fake, animals. “The wood is Swedish pine,” Huibers explained, “because that’s the closest we think to the ‘resin wood’ God ordered Noah to use in the Bible. The animals are plastic and come from the Philippines.” The project stems from a dream Huibers had in 1992 in which his native Holland was flooded by the North Sea. “The next day I bought a book about Noah’s Ark,” he said. “That night while sitting on the couch with my kids, I looked at it and said: ‘It’s what we’re going to do.'” He originally wanted to sail his ark, which is moored on a river, but was forced to abandon that plan after authorities raised health and safety concerns.

Catholic News Service reports (July 19) that a scar on a tree in West New York, New Jersey, has attracted attention due to a shape that resembles Our Lady of Guadalupe. Jim Goodness, a spokesman for the Newark Archdiocese, calls it “a natural occurrence” and hopes the interest it has prompted might lead people to a deeper faith. Crowds began to form at the site on July 14, and local news outlets report that hundreds of people have come to the site, dubbed the “Virgin Mary tree.” The tree was duly yellow-taped and is being guarded by city police and volunteers. “It was looked at by one of the priests in the area,” Goodness said. “It does have some of the markings of the overall outline of the icon.” The tree site and those gathering around it caused some unrest in the neighborhood, including bickering that broke out when a passing jogger declared the tree “idolatry.” Shop owners were also concerned about the crowds negatively affecting business.

A successful businessman from Tampa Bay, Florida, wants to start a new life, so he’s selling his old one — for $3.5 million on eBay. Shane Butcher, 29, is auctioning off everything he owns, including his chain of three fully equipped and stocked video-game stores, a two-bedroom waterfront townhouse, a waterfront rental condo, three cars, and two kayaks, reports ABC News (Aug. 11). “There are some things that aren’t included,” Butcher said. “My dog, for instance. My wife and child aren’t included either.” As part of the deal, he will train the stores’ new owner for six months and will even pay one year of the stores’ leases and fees while the owner gets acclimated to the new gig. “Big corporations will buy out other corporations that are in trouble and for hundreds of millions,” Butcher said. “I don’t see why someone wouldn’t want to buy a business that’s doing well.”

According to USA Today (Aug. 8), a Washington, D.C., musician who ordered a flat-screen TV from Amazon.com received a military-style assault rifle instead. Seth Horvitz ordered a 39-inch Westinghouse TV through one of the online retailer’s third-party vendors. Later, UPS left a box at his apartment, which he thought must be a stand for the set. Inside, Horvitz found a black, semiautomatic Sig Sauer SIG716, similar to the M16, which U.S. armed forces have used for over 50 years. “I was confused as to how that kind of mix-up could happen,” Horvitz said. “It surprised me to see how easy it would be for a gun to show up on someone’s doorstep — not just a gun, but an assault weapon.” Horvitz notified the sender and called D.C. police. The two officers who responded “were a little confused at first; they’ve never seen anything quite like it,” he noted. The police offered to remove the weapon because “it’s illegal to transport in a car, so it can’t be returned.”