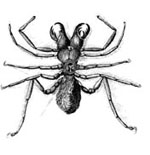 The archbishop of Ottawa expressed his regret after Catholics were shocked at the sight of a giant robotic spider perched atop the city’s cathedral, which they called “sacrilegious,” “demonic,” and “disrespectful” of a sacred space (The Catholic Register, Aug. 1). The spider, named Kumo, was created by La Machine, a street-theater company based in France, which was in Ottawa as part of celebrations marking Canada’s 150th birthday. The performance involved Kumo “waking up” to organ music from inside the cathedral. As the spider, suspended from cranes, climbed off its perch between the towers, “snow” fell from above. Participation in the show was motivated by a desire to engage with the wider Ottawa community. “Cathedral staff were shown other cathedrals and public buildings in Europe that had been involved,” Archbishop Terrence Prendergast said. “It seemed innocent enough.”

In 2014 SoftBank Group, a Japanese telecommunications company, introduced a humanoid robot called “Pepper,” which welcomes customers to its mobile stores. Now Pepper has a new role — as a Buddhist priest for hire at funerals. Adorned with Buddhist robes and chanting sutras in a computerized voice while tapping a drum, Pepper was on display at a funeral industry fair in Tokyo (Reuters, Aug. 23). With Japan’s population aging and shrinking, many Buddhist priests lack financial support, prompting some to find part-time work outside their temples. The robot could step in when a priest is not available. At a price of 50,000 yen (approx. $450) per funeral, a robot priest would cost less, compared to more than 240,000 yen ($2,200) for a human priest. Pepper has yet to be hired for a funeral.

A robot security guard tasked with patrolling the Georgetown Waterfront shopping area in Washington, D.C., apparently rolled into a fountain and drowned itself (International Business Times, July 17). While on the shopping-mall and office-complex beat in the nation’s capital, the beeping, whirring, and whistling robot fell over the fountain steps and collapsed into the water. Its array of ultrasonic sensors and audio detection devices couldn’t keep the five-foot, 300-pound autonomous Knightscope droid from plunging to its mechanical death. One of the K5 robot’s main features — its ability to capture photos and video of potential suspicious activity — likely recorded its own demise. This isn’t the first time a Knightscope self-destructed. In 2013 an Irobot Roomba 760 climbed onto a hot plate in Kirchdorf, Austria, and lit itself ablaze. The owners of the robot insisted the machine had been switched off but somehow reactivated itself in the “fatal” kitchen incident.