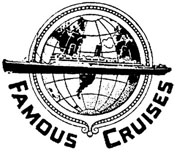 A PARABLE ABOUT CATHOLICS IN AMERICA

Once upon a time there was a couple who fell in love with the Love Boat. Through many years of a long marriage they dreamed of the day they would be able to take a cruise on a luxury liner. They read travel brochures and magazines. They listened eagerly to stories told by others who had already made the cruise.

But for most of their married life they were a long way from being able to afford it. They had children to raise, a mortgage to pay. So they pinched pennies. They made do with a minimum of movies, restaurants, vacations; they abstained from smoking; they drank cheap beer. They were to experience the delights of a luxury cruise before they died.

The great day finally arrived. The kids had grown up and moved away, the mortgage was paid off. At long last our couple was ready to enjoy the good life. So they paid their fares and boarded the ship, and it was everything they hoped for.

At least it was for the first few days of the voyage. The ship sprung a leak, a slow but dangerous leak, and a number of passengers in the lower decks drowned.

Words of Wisdom from the Walrus

Was John Lennon correct when he prophesied that The Beatles were bigger than Jesus, that rock n'roll would outlive Christianity?

Sexual Sanity on the Dark Continent

Workers of the World, Unite! — In Front of the Boob Tube

"Prime-time roles" for "people of color on the small screen"