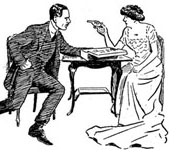 Lessons to Be Learned From the Ecclesiastical Battle Over “Inclusive Language”

There is a Middle Eastern proverb that says one should not let the camel’s nose under the tent (for the nose, harmless in itself, will soon be followed by the camel, and then goodbye tent). In 1981 I glimpsed a camel’s nose poking under the tent of Catholic liturgical language and tried to give it a sharp rap. The matter was seemingly slight, a question of a single syllable: a proposal to drop the word “men” from two places in the rite of Mass. The National Conference of Catholic Bishops (NCCB) had informed the Holy See that they wished to alter the words that American Catholics use in the Creed from “for us men and for our salvation” to “for us and for our salvation,” and to change the formula for consecration of the wine from “it will be shed for you and for all men” to “it will be shed for you and for all.”

I wrote and spoke against both proposals, for three sound reasons. First, “men” had not lost its generic meaning in common English parlance (that is, normal people, whether well educated or illiterate, continued to use and interpret “men” as inclusive of males and females alike). Second, the campaign to eliminate “men” was ideologically driven and was, in fact, orchestrated by individuals and groups who did not accept received Catholic teaching on a variety of issues relating to faith and morals, particularly the ordination of women. Third, this little change would be the first pebble in an avalanche of changes, authorized and unauthorized, that would make all of Catholic life (liturgical, doctrinal, and morabppoliticized and polarized.

The Holy See agreed that the American bishops could change the consecration but not the Creed. Score one for the tent, but one for the camel. The struggle over “inclusive language” had begun in earnest.

In 1990 a committee of liturgists presented to the NCCB proposed guidelines for “inclusivizing” the American Lectionary (the book of Scripture readings used at Mass). I wrote and spoke against this project, but the bishops voted overwhelmingly to approve the guidelines. In 1991, I published an article arguing that no revised Lectionary could licitly be used in this country without the prior approval of the Holy See, for a careful reading of canon law demonstrates that review by Rome is required. This turned out to be correct. And now Rome has settled the matter of the American Lectionary, by ruling against the “inclusivizers.” It seems to me useful — even essential — for American Catholics to be aware of the events of the past several years, for, as another proverb has it, those who do not know history are condemned to repeat it. The history of the attempt to revise our Lectionary teaches that the “inclusivity” project was a flawed program based on an appeal to false data.