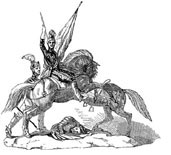 The Looming Civil War Over Abortion

A HOUSE DIVIDED AGAINST ITSELF CANNOT STAND

In my opinion, the agitation about abortion will not cease until a crisis shall have been reached and passed. A house divided against itself cannot stand. I believe this government cannot endure permanently half “prochoice” and half “prolife.” I do not expect the United States to be dissolved — I do not expect the house to fall — but I do expect it will cease to be divided. It will become all one thing or all another.

These are not my words. They are the barely altered words of Abraham Lincoln, from his famous “House Divided” speech of 1858. Our house today is as deeply divided over abortion as it was then over slavery. And Lincoln’s prophecy seems to me freshly applicable. Either Christianity shall rebaptize the heart of the nation, or secularism shall drive out Christianity, but there will be no peace until one or the other is victorious.

Why do I say so? Christianity is the historical source of the laws against abortion which existed prior to Roe v. Wade. When Christianity was born into the Roman empire, it made novel and severe moral demands on its converts, demands fundamentally at odds with pagan practices. The world governed by Rome used all sorts of birth control, from prophylactic to medicinal to magical, and accepted abortion (as well as infanticide, divorce, homosexuality, and suicide). Christianity rejected all of these, and as it evangelized society over the next millennium, all of these practices eventually became prohibited by law. That our society has until recently outlawed abortion (and the other practices mentioned) is intelligible only because Christianity was the historical source of our moral, and hence legal, fabric.

Christianity’s rival, a secularist counter-movement, was born five hundred or so years ago. The Christian moral arguments were attacked by the new intellectuals, and their views slowly de-evangelized Western society. The transition from Christian to un-Christian laws (legal birth control, divorce, abortion, homosexuality, euthanasia, and now, with partial-birth abortion, infanticide) has happened right before our eyes in the 20th century. But the rising stream of secularism had been eroding the moral banks cut by Christianity and washing away its moral boundary markers for some time. Roe v. Wade in 1973 was a shocking high-water mark but not an aberration.

The U.S. bishops did not intend to suggest that Catholics who vote for a pro-choice candidates are putting their souls in jeopardy.

The practice of abortion as a Satanic ritual is confirmed in a disturbing interview with a former leader of the Church of Satan.