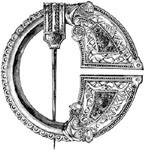 The Long Conversion of Oscar Wilde

"...THROUGH A BROKEN HEART MAY LORD CHRIST ENTER IN"

“I am not a Catholic,” said Oscar Wilde. “I am simply a violent Papist.” The wittiest man of his time drew this clever distinction for a Catholic friend in Rome. Another of Wilde’s left-handed compliments to Catholicism was his dictum that, of all religions, Catholicism is the only one worth dying in. Wit was Wilde’s art, and true to his observation that Life imitates Art, before his life came to an end these witticisms had turned serious: When he died, Wilde was no longer a blithe devotee of things Roman but a baptized and anointed member of the Catholic Church.

Wilde’s name is much in the air these days. There are stage plays about his life, a recent feature film, and articles in the national press. His premature death in 1900 at age 46 will have its centenary soon, and Oscar Wilde is presented to us as an artist persecuted for his homosexuality, a protomartyr for the cause of homosexual liberation.

Wilde’s secular hagiographers do see part of his story. He was homosexual, promiscuously so, and his downfall was precipitated by his passion for a younger man. It was this young man, Lord Alfred Douglas, who in one of his poems called their desire “the love that dare not speak its name.” The tale of their romance has classic, even operatic, features — objections by the beloved’s family, separation and exile, brief reunion before the lover’s death. The heart left unmoved by their story would be hard indeed.

Yet this sad accounting fails to give us the whole of Oscar Wilde. He was prosecuted for “acts of gross indecency with other male persons,” found guilty, and sentenced to two years in prison at hard labor. But his reading during his imprisonment included works by St. Augustine, Dante, and Newman. When he emerged from prison, injured and in poor health, he limped across the channel to France to reunite with his homosexual lover. But his first act on his release had been to write to the Jesuits begging to make a six-month retreat at one of their London houses. Wilde is celebrated as the center of a circle of unconventional poets and artists known as decadents and aesthetes. But looking a little past these labels we find that many of these men became sincere converts to Catholicism — Wilde being the last of them, and entering the Church only on his deathbed.