Volume > Issue > Does It Take an Immigrant to Explain It to the Natives?

Does It Take an Immigrant to Explain It to the Natives? 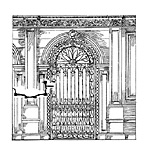 Okay, the book’s title is a bit corny. But the book itself isn’t — indeed, it’s riveting. It’s the story of how Scott Hahn, an evangelical with militantly anti-Catholic convictions, wound up becoming one of those Catholics he’d been trying to bring over to Protestantism. And more: We get his wife Kimberly’s angle on the story. Each chapter has two parts: Scott’s intellectual version of the drama, and then Kimberly’s more down-to-earth rendition.

And a drama it is. Scott and Kimberly were educated at Grove City College and Gordon-Conwell Theological Seminary, both solidly Reformed institutions. First Scott, then Kimberly, became Catholic.

What went wrong? At Gordon-Conwell, Scott took upon himself the task of being a detective — “searching Scripture to discover clues as to the whereabouts of real Christianity….” He knew it didn’t reside in Rome, but which one of the 25,000-plus Prot­estant denominations had it right? That was the question. (You must admire the young man for being willing to undertake such a daunt­ing task.) Where were the clues? Only in Scripture. With Bible and magnifying glass in hand, Scott set about rethinking doctrine “from the ground up” — and, if necessary, he was willing, as he says, to rein­vent the wheel. And in a way he least expected, he did.

Scott’s first major discovery was that the New Testament does not teach the doctrine of salvation by faith alone (sola fide), one of the two major pillars of the Reformation. For example, Scott, who revered Luther and regarded Paul as “the first Luther,” was traumatized to read Paul saying, “if I have all faith so as to remove mountains, but have not love, I am nothing” (1 Cor. 13:2).

Meanwhile, Kimberly, who wanted nothing more than to be a pastor’s wife and the mother of at least four or five children, became involved in the prolife movement. She noticed that birth control kept “creeping” into the abortion issue. So, without a touch of Roman Fe­ver, she, in her course in Christian ethics, decided to study the issue of artificial birth control. She found that Scripture always de­scribes children as a blessing, even saying the more, the better (Mal. 2:15). More generally, she found that “the very image in which man and woman were created was the unity of the three Persons of the Godhead, pouring themselves out in total self-donating love to each other.” So, “the question I asked myself was, Does our use of birth control — intentionally blocking the life-giving power of love while enjoying the unity and pleasure that the act of marriage gives us — enable my spouse and me to reflect the image of God in total self-do­nating love?” She also asked if the use of birth control reflected God’s or the world’s view of children.

Evangelical Protestants em­phasize that everything must be submitted to “the lordship of Christ.” Kimberly wondered if, by using birth control, evangelicals were exempting their bodies and their fertility from that lordship.

You can see how important it was that Kimberly’s story be in­cluded in this book. How odd that the first uniquely Catholic tenet a Protestant would embrace would be the prohibition of artificial birth control, probably the least popular of Catholic teachings. Yet that was far from making Kimberly a Catholic.

After his seminary training, Scott was pastoring a Presbyterian congregation and teaching in a Presbyterian seminary. In prepar­ing for his course on the Gospel of John, he stumbled over John 6:52­-68, wherein Jesus says, “he who eats my flesh and drinks my blood has eternal life, and I will raise him up at the last day.” Studying the context of these words, Scott real­ized that they could not be given merely symbolic meaning, which is what he had been taught.

In a course Scott was giving on Church history, one of his stu­dents asked him about the other major pillar of the Reformation, sola scriptura. “Where,” the stu­dent asked, “does the Bible teach that ‘Scripture alone’ is our sole authority?” Scott was caught off guard. He answered by insulting the student. But that didn’t work. The annoying student pressed the issue. Scott then answered with the stock Protestant proof-texts, which convinced neither the stu­dent nor Scott. So Scott did some homework of his own, coming up with no answer. In desperation, he called former professors and major theologians. One of them was can­did: “Scott, you really can’t dem­onstrate sola scriptura from Scripture…. It is a theological presup­position…rather than a proven conclusion.” Scott noted the “irony” of believing that the Bible is the only authority when the Bible itself doesn’t teach that, in­deed when the Bible says, in the person of Paul, “Stand firm and hold to the traditions which you were taught by us, either by word of mouth or by letter” (2 Thess. 2:15). Traditions! And out of the mouth of “the first Luther”!

In their pilgrimage, Scott was a few steps ahead of Kimberly. When, early in the journey, Scott suggested that they settle upon the halfway house of Anglicanism, Kimberly was aghast — leaving the Presbyterianism of her family was unthinkable. But when Scott had moved well beyond the Anglican compromise and was going full throttle toward Rome, Kimberly virtually begged him to be satisfied with Anglicanism. For Scott, how­ever, it was all or nothing. The Catholic Church audaciously claims to be the one true Church founded by Jesus, and that Church’s head claims legitimacy by virtue of an unbroken line of suc­cession going all the way back to Peter, and claims to be Christ’s in­fallible vicar on earth. This Church is not like, say, the Southern Bap­tist Convention, which, if it is wrong, would be, from Scott’s Pres­byterian perspective, wrong in mi­nor ways. No, if the Catholic Church is wrong, she is hideously wrong, indeed “nothing less than diabolical.”

But even at full throttle, Scott was simultaneously, even franti­cally, looking for the brake pedal. With Kimberly’s eager prompting, Scott pleaded with theological comrades to stop him, to rescue him, to show him that Catholi­cism is wrong, dreadfully wrong. (To jump ahead in the story: Some of those appointed to save Scott from Romanism would themselves convert to Rome.)

The scandalous part of this story is that when Scott initially approached Catholic priests about answering his remaining ques­tions and possibly being received into the Church, they rebuffed him. Said one icily: “If you want someone to help you convert, you’ve come to the wrong per­son.” When Scott enrolled in the doctoral program at Duquesne University, he found that he was “the only Protestant in some…seminars and the only student de­fending Pope John Paul II.” But Scott persevered. He found an Opus Dei priest who took his ques­tions and views seriously.

But he also turned to the prominent Calvinist theologian John Gerstner, to help him get off the Roman road. Scott and Gerstner conferred, and agreed that the Word of God in Scripture is inspired and infallible. “What more do we need?” asked Gerstner plausibly. But Scott, pointing to the 25,000-plus Protestant de­nominations (with five new ones being formed each week) that claim to follow the plain meaning of Scripture, replied, “God must know we need something more.”

Scott pressed the issue: “Church historians all agree that we got the New Testament from the Council of Hippo in 393 and the Council of Carthage in 397, both of which sent off their judg­ments to Rome for the Pope’s ap­proval…. Besides, there were many other books that people back then thought might he inspired…. There were also several New Testa­ment books, such as Second Peter, Jude and Revelation, that some thought should be excluded.” So, the problem is: If the 27 books of the New Testament are infallible, and if the books excluded from the canon are not, wouldn’t the deci­sions about which books belong in the New Testament and which do not, have to be themselves infal­lible? How could fallible conciliar and papal authority assemble in­fallible teaching? Gerstner’s an­swer. “Scott, all we have is a fal­lible collection of infallible docu­ments.” The answer, as Scott real­ized, is self-refuting.

Scott’s next pit stop was the doctoral program at Marquette University, where he found, merci­fully, “a team of outstanding Catholic theologians who loved the Church and taught the Church’s doctrines very well.” Shortly thereafter (Easter Vigil, 1986), Scott Hahn was received into Holy Mother Church.

End of story? No. In a sense the drama thickened, for Kim­berly, no theological lightweight herself, was now more than a few steps behind Scott, and she dug in her theological heels. Their mar­riage hit the rocks. As Kimberly put it: “I had a very deep sense of betrayal. I had nothing against Catholics, but I would not have dated one. Now I was…married to one!” Moreover, her dream of being a pastor’s wife had crashed. It would take four years of conflict and anguish before Kimberly too would be received into the Church.

Today Scott teaches at the Franciscan University of Steubenville, and Kimberly homeschools their four children. Scott has a booming tape ministry through which he explains the Catholic faith. According to Peter Kreeft in the Foreword: “There are no tapes more in demand and more extensively and enthusiastically shared among American Catholics today than the Hahn tapes.”

The special appeal of Scott’s pilgrimage and witness is that he discovered Catholicism by reading, not Aquinas or Chesterton, but the Bible. Because the Catholic Church gave us the Bible, it shouldn’t be a surprise, though many there be who assume the Bible was written by Protestants, for Protestants. One only hopes that those cold and theologically deformed priests who turned Scott away from the Church will one day hear some of his 200-plus tapes, and as a consequence once again be on fire for authentic Catholicism. As a certain fellow named Joe exclaimed after hearing Scott teach, “Yep, sometimes it takes an immigrant to explain it to the natives.”