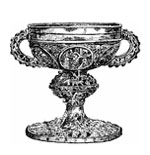 By Dale Vree | May 2007
Dale Vree is Editor of New Oxford Review.

This Editorial must be written in the first person. When your Editor was a Protestant at the rough-and-tumble Dorsey High School in Los Angeles, I happened to walk into a Catholic church for the first time. This was in my senior year in 1961 before Vatican II. It was a weekday about 4 PM (no Mass in process), and not in a good part of town.

I was mesmerized. It was dark, but there were many votive candles lit. There were several people praying on kneelers. The altar was against the wall. Nothing like our Protestant Reformed churches.

I entered a pew. I put the kneeler down and prayed.

I will always remember that experience.

In my sophomore year at UCLA, I was becoming disconcerted with my Reformed Protestant church. I inquired about the Episcopal Church. I remembered my experience in the Catholic church. The Episcopal Church seemed the same. Votive candles lit, people praying on kneelers, the altar against the wall. It also had other things I associated with the Catholic Church: a Communion rail, sanctus bells, incense, genuflection, the Tabernacle up front on the altar, women and girls wearing chapel veils and hats, real stained-glass windows, and altar boys. In my junior year, I went up to the University of California at Berkeley, where I was confirmed as an Episcopalian.

Joseph Chihwatenha was a convert of the Huron tribe who helped the Jesuits and became the cornerstone of the emerging Huron Church.