Volume > Issue > The Limits of the Moral Law 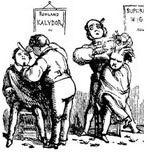 IS THERE SUCH A THING AS "SOCIAL SIN" ?

By Thomas Storck | June 2012
Thomas Storck has written widely on Catholic social teaching, Catholic culture, and related topics. His most recent book is Christendom and the West: Essays on Culture, Society and History.

Father Joseph Rickaby, S.J., in a conference given to Catholic students at Cambridge University in England in 1897, while commenting on why the private interpretation of Scripture is wrong and why we are dependent upon the Church for the faith we have received, made the following observation:

God follows the great rule of His Providence, providing for man through man, not only in temporal matters, in which every good gift that we have becomes available to us as members of human society, and through the co-operation of our fellowmen, and not otherwise — but also in the needs of our soul and in matters of salvation.

Fr. Rickaby thus illuminated the simple truth that man is a social being, a truth perhaps first enunciated by Aristotle and seconded by St. Thomas Aquinas. Pope Leo XIII summed up this two-thousand-year-old conclusion of both sound philosophy and divine revelation in his 1885 encyclical Immortale Dei: “Hence it is divinely ordained that [man] should lead his life — be it family, social, or civil — with his fellow-men, amongst whom alone his several wants can be adequately supplied.”

In the Anglo-Saxon world, however, we are burdened with the Robinson Crusoe-type notion that man is primarily an individual, or at any rate shows himself at his best or most characteristic as such — that society is not essential, but is merely an adjunct or supplement to our humanity. This is not only historically untrue and philosophically false, it is a product of Protestant culture, of Calvinist individualism, and should be especially abhorrent to anyone possessed of a Catholic mind. That we are essentially social beings has important implications for morality — that is, for mankind’s right living.

Economics & the Theology of Work

When the worker is engaged in work that is to him intrinsically meaningless, then he is deprived of work in the deeper sense, even when he makes a living wage.