Volume > Issue > The Gender of the Holy Trinity 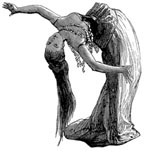 The Gender of the Holy Trinity

SHALL WE FEMINIZE THE HOLY SPIRIT?

By Monica Migliorino Miller | May 2003
Monica Migliorino Miller received her Ph.D. in Theology from Marquette University and was a classmate of Scott Hahn's (and was present at his dissertation defense). She is an Associate Professor of Theology at St. Mary's College in Orchard Lake, Michigan, and is author of Sexuality and Authority in the Catholic Church (University of Scranton Press) and The Authority of Women in the Catholic Church (Crisis Books).

“Two parents have generated us for death, two parents have generated us for life.” These words of St. Augustine succinctly sum up a basic truth of Christianity. The order of man’s redemption is bound to the order of creation. We certainly know who our parents of death are — Adam and Eve — and more proximately our own fathers and mothers who gave us life in a world in which we will die. To escape the curse of death we need to be brought into life by the love and unity of two other parents — namely God and the Church. The economy of salvation is a covenant between God and His people. Within this covenant, God is a true life-giving Father. But if the order of creation truly reflects and parallels the order of redemption, then God is a true life-giving Father and the Church is a true life-giving mother. Thus, male and female sexuality from the beginning of creation are the symbols by which the covenantal order of redemption is expressed. There is something about God’s own being that male sexuality truly reflects and something about the Church that female sexuality truly reflects. Indeed, God is not just like a father — God is a Father. Ultimately the essence of fatherhood — and not motherhood — exists in God. Again, God is not like a father — rather, human fathers are like God. Nonetheless, the “gender” of God has been the center of theological controversy in the past forty years. While the feminine nature of the Church is still not fully understood or appreciated, at least no one denies it. At least the Church is not spoken of as a man in the way God is spoken of as a woman.

Of course, for anyone who takes revelation seriously, one of the strongest arguments for the Fatherhood of God is that God refers to Himself as a Father in both the Old and New Testaments. Jesus tells us to call God “Abba,” meaning “Papa.” The decisive weight of Scripture and Tradition is on the side of the Fatherhood of God. Feminists argue, though, that the word “Father” is mere metaphor, or historically conditioned language, that the Fatherhood of God is only one way of understanding God. Indeed, for the most radical feminists, that God is seen as a Father and called “Father” is the result of a sinful, patriarchal culture and Church. The feminist theological movement has been enormously effective in altering many people’s perception of who God is and abolishing so-called patriarchal and androcentric theological language. It is said that God can just as well be called “mother” as “Father.” However, as we shall see below, the word “Father” reveals a truth about God that the word “mother” does not.

One of the most essential insights of Judaism and Christianity is that God is Other — the wholly Other. Unlike the ancient pagan world that blurred divinity and nature, or collapsed God into nature, the Hebrew faith understood that God is other than nature. God is outside of nature as the cause of nature. Yet this wholly Other is in relation to His creation — in harmony with it. He is not in opposition to it. This is the God who can look at something outside and other than Himself and call it “very good.” From this wholly Other God, creation has received its being. The God who is in relation to His creation and yet different from it forms the primary truth upon which the whole covenantal order of salvation itself is based — the truth (first present in the Trinity) of differentiation and unity. This otherness quality of God’s creative action is how He is a Father in relation to His creation. Human fatherhood also manifests this otherness quality. No matter how much a human father loves and cares for his children, his life-giving contribution is apart, removed, and even spatially distant, separated. A father cannot know his children with the same intimate physical bond as a mother. Fr. Walter Ong, S.J., wrote one of the most insightful books on the meaning of male sexuality in relation to the Fatherhood of God, entitled Fighting for Life. He states, “Male sexuality represents God the Father. God is likened to the masculine because he is a source of life that is ‘other, different, separated’ (kadosh the Hebrew word translated sanctus, hagios holy, means at root ‘separated’) from all his creation, even from human beings, though they are in his image and likeness.”

Kirsch's absorbing personality profile of the scrupulous, dogmatic, and uncompromising John portrays him as a man in great distress in a pagan culture.

We draw spiritual lessons from the Bible's 'herem' passages; we can interpret them in a manner that resolves the difficulties they pose.

Where eternal rewards and punishments are concerned, are we more tenderhearted and clear-eyed than our forebears in faith -- than God Himself?