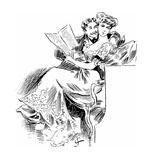 By Brian Thomas Becket Mullady | March 2009
Fr. Brian Thomas Becket Mullady, O.P., entered the Dominican Order in 1966 and was ordained in Oakland, California, in 1972. He received his Doctorate in Sacred Theology from the Angelicum University in Rome, and was a professor there for six years. He has been a parish priest, high school teacher, retreat master, mission preacher, seminary professor, and university professor. He is an academician of the Catholic Academy of Science, and is the theological consultant to the Institute on Religious Life. He has written two books, Man's Desire for God (2003) and Light of the Nations (2006), and numerous articles, and is the author of the Questions Answered column in Homiletic & Pastoral Review.

The “theology of the body” is one of the principal legacies of the pontificate of Pope John Paul II. The Pope systematically presented this extensive teaching in his weekly Wednesday audiences in St. Peter’s Square from September 5, 1979, until February 9, 1983. Many well-meaning orthodox Catholics have attempted to explain this teaching and its theoretical or practical impact. They have been motivated by the same desire as the Pope: to defend the teaching of Pope Paul VI in Humanae Vitae in a new systematic way that takes account of Holy Scripture and sometimes uses a method of exposition derived from 20th-century phenomenology. Unfortunately, many of these attempts suffer from a lack of clarity, which has led some people to erroneously conclude that John Paul II’s theology of the body is so revolutionary as to contradict Catholic sexual moral teaching.

Many of these attempts suffer from the fact that they are presented by Catholics who do not have an adequate understanding of the philosophy and traditional theology that provides the foundation for the Pope’s thinking. Some want to make him a strict phenomenologist. Others say that, though he takes account of the Scholastic tradition represented by St. Augustine and St. Thomas Aquinas, he has gone far beyond that and given a completely new take on the reality of human sexuality. Still others go so far as to reject the Pope’s teaching as a denial of natural law. Some clarifications of the theology of the body, then, are in order.

Many people seem convinced that Pope John Paul II was not a Thomist, but actually accepted phenomenology as the philosophy that most perfectly relates to the present world, a world no longer enticed by objective and deductive arguments but which can only relate to subjective and inductive arguments. The great proponent of phenomenology is the German philosopher Max Scheler (1874-1928). Scheler’s thought was a reaction to that of another German, Immanuel Kant (1724-1804). Both unseated the foundation of a real and objective metaphysics as the correct and perennial philosophy. In his masterful Introduction to the new translation of John Paul II’s theology of the body, Man and Woman He Created Them (Daughters of St. Paul, 2006; from which all citations are taken), Michael Waldstein correctly states, “In particular, Scheler does not seem to escape from the loss to real being in Kant.” He then quotes John Paul II, who clearly states, “The analysis of the systems of Kant and Scheler shows the conclusion that a consistent teleology and perfectionism has no room in the philosophy of consciousness…. It possesses such a character (perfectionism) only in connection with being on the premise of the philosophy of the real. Only on this basis can one speak of a consistent teleology.” The Pope continues, “The whole difficulty is the result of the phenomenological premises of the system and we must assign the blame to these principles.”

Although John Paul II sometimes applies the method and language of phenomenology, his use presumes an objective and realistic metaphysics derived from sense experience that characterizes Aristotle and St. Thomas Aquinas.