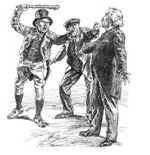 Analyses of the mortgage and banking crisis, from both the Left and the Right, are not hard to come by. Neither is criticism of the record $700 billion government bailout — more than one wag has called it the “mother of all bailouts.” One is tempted to ask: Why are wealthy bankers being handed golden government parachutes while our neighbors who are being foreclosed are kicked to the curb? Eamonn Fingleton, writing in The American Conservative (Oct. 20), wonders at the “amazing aptitude of Wall Street insiders to feather their own nests at the taxpayers’ expense.” It’s Christmastime: Where’s George Bailey when you need him? Instead, we’ve still got George “Bailout” Bush.

The “key question” for Fingleton is “how Wall Street’s greed can be reined in.” (He goes on to make the conservative case for regulation.) Greed is what led to our nation’s financial downfall. But greed doesn’t exist only in the rarefied air of Wall Street high rises. According to Greg Erlandson, president and publisher of Our Sunday Visitor (OSV), “Greed has permeated our society.”

In his October 5 OSV column, Erlandson says that our economic crisis “was an inside job,” perpetrated by “the brokers and bankers pulling in bonuses that weren’t just in the hundreds of thousands but in the millions.” These are the people who have been “most blessed by this country’s abundance, and these were the people most driven by greed.” They are also the ones receiving what might go down as the most mammoth dose of government welfare in U.S. history.

But Erlandson hits a point that has largely gone unnoticed: “What’s pushed America to the brink of financial disaster was not all those illegals coming in and ‘stealing’ our jobs as busboys and janitors and underage laborers in meat-processing plants.” It wasn’t “day laborers on the city streets hoping for a job or the field hands bent double from hoeing weeds on corporate farms.”

The Christian Art of Christmas Spending

Cheerful giving lifts man from the cold, heartless realm of business transactions to a spiritual world of liberality and abundance.

Subsidiarity and solidarity were practiced in Cape Breton under the influence of the Catholic social-justice experiment, the Antigonish Movement.